KINCARDINE, ONT. -- A Toronto man has died after jumping in the water to help two teens who were swept off the pier in Kincardine by a large wave.

Around 8 p.m. Thursday, OPP received a report of two teens being swept off the pier by a large wave at the main beach.

When officers arrived on scene they found that the teens had returned to shore, however a man who jumped in to help had been pulled from the water unresponsive.

Police say more than one adult jumped into a very choppy Lake Huron to try and save the teens.

"There was more than one person that tried to help. I don’t know exactly how many, but unfortunately one was removed from the water unresponsive, and later pronounced deceased," says South Bruce OPP Const. Kevin Martin.

The deceased man has been identified as 38-year-old Aleem Ramji of Toronto.

Kincardine’s piers are now closed due to the drowning and the dangerous waves washing over the concrete structures that lead to the town’s marina.

Lake Huron hasn’t been this high since 1986, and following storms, waves are even higher and very dangerous. Martin says keeping a respectable distance could just save your life.

"I understand the attention if you’re a surf enthusiast or perhaps a strong swimmer, but please recognize it’s billions of gallons of water. It’s a force that you just cannot fight," he says. 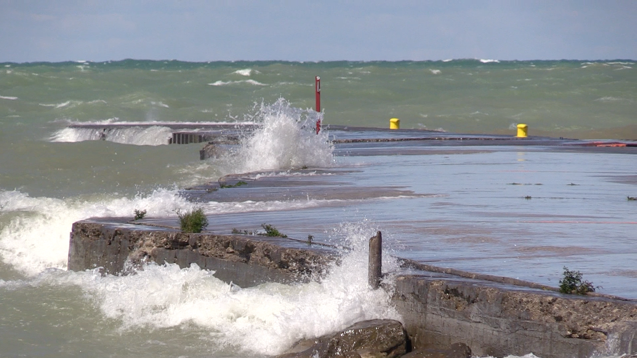 Martin has some advice if you find yourself wanting to help someone struggling in the water.

"If you do happen to be around when someone is swept into the water and the waves are as choppy as they are today, for your personal safety, I would ask you to find a personal floatation device or life buoy and send it out. Obviously help to the best of your ability, but consider the awesome power of this water. You might be an excellent swimmer, but understand the awesome, awesome force you’re going to be fighting if you jump in there."

The municipality says Kincardine’s piers will remain closed until the waves subside.