Tornado touches down northeast of Listowel amid severe weekend storms

Environment Canada issued a statement that said the violent winds of up to 220 kilometres per hour occurred in Teviotdale, northwest of Kitchener.

It said the tornado left about nine kilometres of damage in its wake, including destroying the exteriors of two homes, ripping through barns, wrecking cars and downing both trees and power lines.

Video footage showed some police cruisers with windshields caved in that were parked at the North Wellington detachment of the Ontario Provincial Police.

The tornado touched down at about 9 p.m. amid an extreme bout of rain, wind and hail in southwest and southern Ontario that knocked out power to tens of thousands.

Marina Koumarelas with the Teviotdale Truck Stop says she was at work when the tornado happened.

She said main roads were closed about half an hour after the winds touched down, and some had still not reopened by Monday afternoon.

"It was very scary," she said, adding that she did not see the actual funnel clouds, but did see the collateral damage to trees and structures including a nearby chicken barn.

Officials in Wellington County say the tornado caused damage in the town of Minto and Wellington North Township, but they have received no reports of injuries.

The mayor of North Wellington, Andy Lennox, met with some of the hardest hit residents and said the storm caused extensive damage.

"Damage is significant", said Lennox in a news release.

"It would be safe to say it will be in the millions of dollars."

Video footage showed some police cruisers with windshields caved in. They were parked at the local Ontario Provincial Police detachment.

About 900 hydro workers were still working on Monday trying to restore power to the last of about 50,000 Ontarians who were still in the dark after the previous day's storms.

Fewer than five-thousand customers were still without power as of early Tuesday.

Environment Canada said there may have been another brief tornado or two during the province's first bout of severe storms, but there was no serious damage or confirmed reports.

More than 8,600 customers were without power on Monday evening, but that number had dwindled to fewer than 1,000 by early Tuesday. 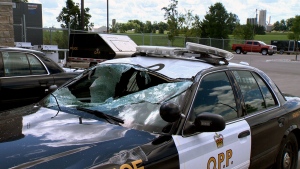