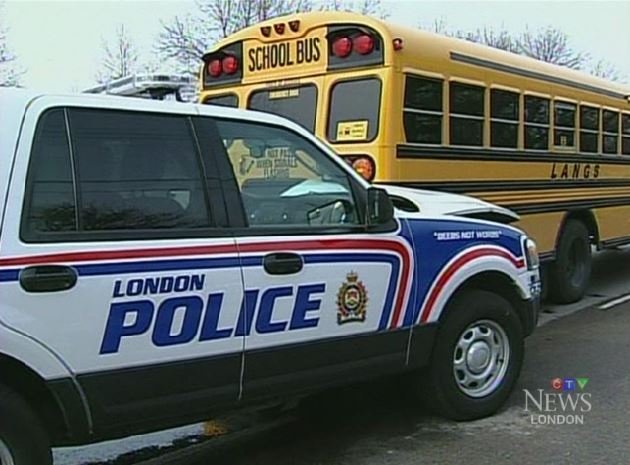 A police cruiser collided with a school bus in London, Ont. on Thursday, May 8, 2014.

Separate collisions involving a car and a pickup, a police cruiser and a school bus and an SUV and a scooter kept emergency crews busy Thursday.

Around 9 a.m. a Lang's school bus was struck by a London police cruiser on Commissioners Road West near Andover Drive.

There were 15 children and a driver aboard the bus at the time, but no one was injured.

The police officer in the cruiser was also un injured. She has been identified as one of the force's school safety officers.

Then, a two-vehicle crash on Wonderland Road South at Westminster Drive around 10:30 a.m. sent two women to hospital.

A southbound pickup truck ended up in the ditch after colliding with a car that appears to have gone through a stop sign.

The female drivers in both vehicles suffered non-life-threatening injuries.

Finally around noon, police were called to Commissioners Road just west of Wharcliffe Road after a woman on a scooter was struck by an SUV.

Police say the woman suffered only minor injuries but needed to be transported to hospital.

The investigation in the crash is ongoing and police say charges may be pending.