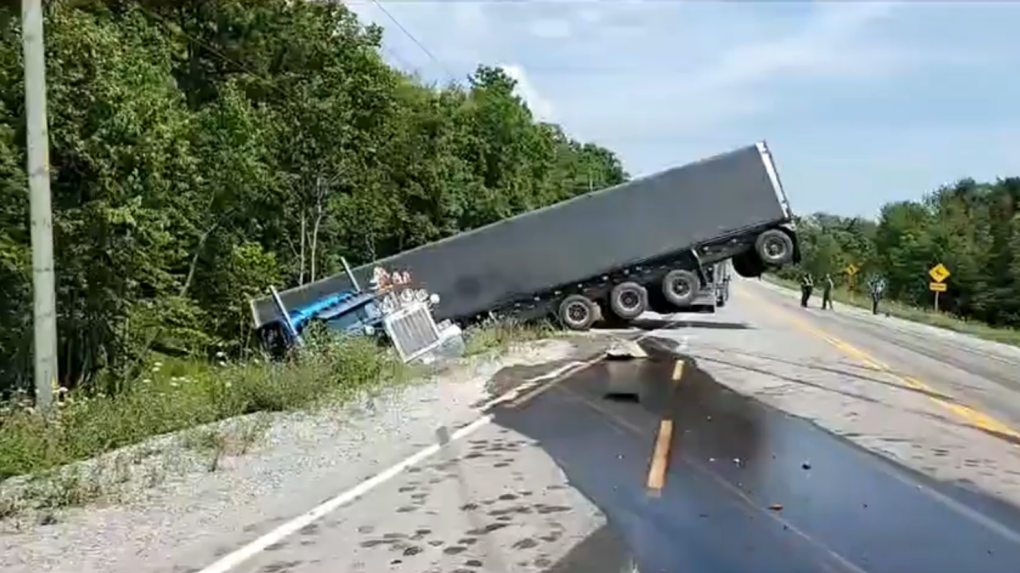 Shortly after 1:30 p.m. a collision at Cockshutt Road and St. John's Road, outside of Port Dover, saw two drivers treated by paramedics, with OPP saying one was lucky to be alive.

Const. Ed Sanchuk says, "I am at a loss for words. We're very fortunate that we're not dealing with a fatal motor vehicle collision, the truck you see behind me is empty, normally carrying large rolls of steel. In this case here the driver took evasive action, and was able to avoid ultimately killing the driver of the red motor vehicle that is down the ditch."

OPP say the transport truck was eastbound on St. John's when it collided with a sedan that was southbound on Cockshutt Road.

The Ministry of the Environment has been called in, and the area was expected to remain closed for some time as a diesel fuel spill across the roadway was cleaned up.

Driver lucky to be alive after colliding with a transport truck at St Johns Road East and Cockshutt Road @NorfolkCountyCA. Both drivers transported to hospital. Roadway closed as investigation continues. #NorfolkOPP ^es https://t.co/0hpIAk2jc4

Just up the road and two hours earlier, around 11:30 a.m., there was a collision at Cockshutt Road and Concession 8 in Townsend that left one vehicle a distance from the roadway.

A vehicle that was southbound on Cockshutt reportedly collided with a westbound vehicle on Concession 8.

That two-vehicle crash left eight people injured. From one vehicle, an infant, two small children and a driver, and from the other three youth and the driver, were all taken to hospital.

The investigation is ongoing, but police are reminding people to slow down.

Sanchuk says, "In this case here seatbelts definitely saved some lives," and he reminds drivers to ensure children are properly restrained.

The first crash of the day happened at Highway 59 and Mall Road north of Delhi shortly before 10:30 a.m.

The crash, which left one vehicle on its roof, saw four people treated for minor injuries.