And a spectacular scene it was, said resident Danielle Ruttimunn.

“We couldn't believe what we saw actually. You don't anticipate seeing a truck upside-down in your driveway at three o'clock in the morning.”

Ruttimunn was in bed at the home she shares with her best friend and her friend’s young daughter on Jalna Boulevard, when at about 3 a.m. a pickup truck slammed into the garage, and struck the two vehicles in the driveway.

“I saw it before I heard it with the commotion of hitting all the recycle bins and stuff,” she said. “My bedroom's just right above where the garage is and I saw the headlights come through the window. And I immediately just jumped out of bed. Pretty much just instinct and yeah, next thing you know the whole house shook.”

But that was only the final stop in an apparent trail of destruction involving the pickup truck.

A few moments later it crashed into a police cruiser at Southdale East and Adelaide Street South before taking off, she said. Two officers in the vehicle received minor injuries. Damage to the cruiser is estimated at $4,000.

“The cruiser had located the vehicle parked in the area of Adelaide Street South and Southdale Road East, and when the cruiser attempted to stop the motor vehicle the vehicle collided with the cruiser.”

Police say witnesses saw the occupants flee the vehicle after the third crash. They were tracked by K-9 units and emergency response units and arrested.

The total damage estimate for vehicles and home is about $92,000.

Hours after the crash neighbours gathered to watch the damaged vehicles being removed from the home and driveway.

Zebadiah Hartung, who lives just a couple doors down, said he was rattled by the whole affair.

“It's terrifying man, honestly. You just never know what can happen even when you're just lying in your bed trying to go to sleep. Like you gotta get up in the morning and go to work and school and all that. Man, it's crazy.”

Neighbour Jimmy Zabian told CTV News drivers often speed through the neighbourhood, but he’s never seen anything quite like this.

“I was shocked when I saw something like this. Doesn't fit my mind.”

Ruttimunn added that she’s glad no-one else was hurt. “You never believe it's going to be your house. And you know that's the thing, it's like people are just being completely reckless.”

The incident is being investigated by the London Police Street Crimes Unit. 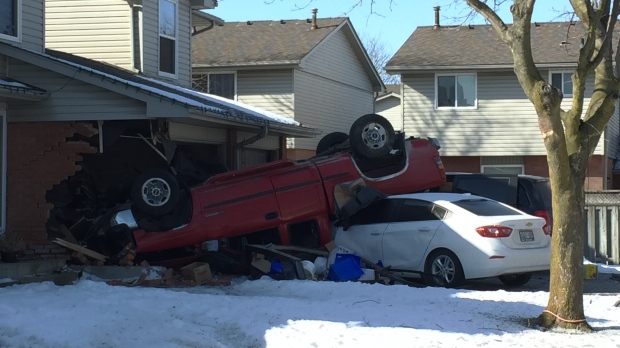