Thousands of chickens are dead and damage is estimated in the millions, following a fire north of Blyth.

Fire crews spent much of the night dealing with a blaze at a barn on Moncrieff Road North in Huron County.

A neighbour reportedly saw flames around 9 p.m. Thursday and told the farmer, who tried to extinguishing the blaze before calling in fire crews.

The main chicken barn and another building were levelled by the fire. Two nearby buildings were saved from fire damage.

Officials say 46,000 chickens died as a result and damage is estimated at $1.3 million.

Investigators have determined the cause of the blaze to be electrical.

Fire crews had to haul water from Blyth to battle the blaze and homeowners in the area can expect lower water pressure throughout the day.

Moncrieff Road was closed in the area of the blaze but reopened around 9 a.m. 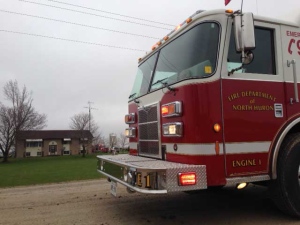