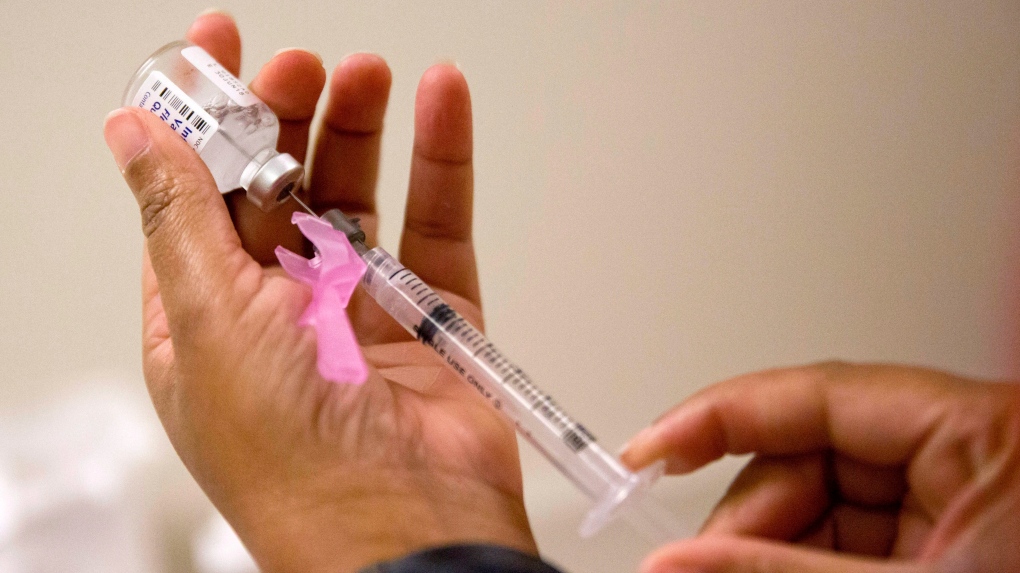 TORONTO -- This season's influenza vaccine appears to be highly effective, reducing the risk of infection with the dominant circulating flu strain by more than 70 per cent -- far better than what was seen with last year's shot, Canadian researchers say.

Their mid-season analysis, published online Thursday in the journal Euro Surveillance, shows this year's flu vaccine is 72 per cent effective in preventing infection with the H1N1 respiratory virus overall across all age groups.

The finding is "good news," said lead researcher Dr. Danuta Skowronski of the BC Centre for Disease Control, considering that the efficacy of last year's shot was less than 20 per cent, due primarily to a mismatch between the vaccine and the H3N2 strain that prevailed during the 2017-18 season.

Another reason is that the influenza vaccine tends to perform better during seasons dominated by H1N1, she said, noting that Australia reported a comparable effectiveness rating using the same formulation during its recent flu season.

An effectiveness of about 70 per cent means that getting inoculated would have prevented seven out of 10 cases of influenza in unvaccinated people had they chosen to get the shot, explained Skowronski, an influenza expert at the BCCDC.

"So that's a really important reduction in risk, especially for people with underlying medical conditions, who are facing a greater threat of serious complications if infected by influenza," she said from Vancouver. "They could have reduced that risk by 70 per cent."

With H1N1 dominating, young children have been especially hard hit by the flu this year -- likely because they've had little or no previous exposure to that viral strain and therefore have not built up any natural immunity. The last three H1N1 epidemics occurred in 2015-16, 2013-14 and 2009, when some of today's children would not have been born.

As of Jan. 12, more than 600 children aged 16 and under had been hospitalized, with 93 of them ending up in intensive care and at least seven -- all under age 10 -- dying from complications of the flu, says the Public Health Agency of Canada (PHAC). The death of a three-year-old Quebec girl last week would not have been captured in that report.

Skowronski said children have been disproportionately affected by influenza this year, with kids under age nine making up 28 per cent of the 661 cases analyzed for vaccine effectiveness, even though children comprise only about 10 per cent of the country's population.

"So that's why I think we're seeing this year more younger people represented in the tallies of hospitalizations with H1N1," she said. "It's not that the virus is more virulent. We're having higher attack rates in younger children.

On its weekly FluWatch website, PHAC said there were 20,494 laboratory-confirmed influenza cases reported by the provinces and territories as of Jan. 12, most of them caused by H1N1 and most affecting those under age 65.

More than 1,500 resulted in hospitalization, including 227 ICU admissions and 47 deaths.

PHAC collects data only on laboratory-confirmed cases of people who were tested after seeking medical attention. The actual number of Canadians who contracted influenza without seeing a health-care provider would be many times higher.

The vaccine effectiveness analysis was conducted by researchers with the Canadian Sentinel Practitioner Surveillance Network, headquartered at the BCCDC. The network includes hundreds of primary-care practitioners in B.C., Alberta, Ontario and Quebec, who gather positive test results for flu and vaccination status of infected patients seen on an out-patient basis. Those treated in hospital are not included in the data.

Skowronski said there has been a lot of regional variation in the timing and intensity of the influenza epidemic across the country. Alberta and B.C., for instance, started seeing cases early in the season, while areas in Eastern Canada were hit later and may not have reached their peak.

"We're past the peak here and we're on the downslope," she said of B.C. "But even on the downslope of the epidemic curve, there will be activity for several more weeks."

So it's not too late for people who were not vaccinated to get their shot, especially in regions of the country still seeing rising cases, Skowronski advised.

"That's why it was important for us to get this (vaccine effectiveness) estimate out because it's offering substantial protection, which may still be important in areas where there is elevated activity.

"And don't forget also influenza B has not made much of a showing yet this year, and it typically appears later in the season."

Last season, just 38 per cent of Canadian adults got the flu shot, with vaccine uptake varying by age and risk factors for complications, a PHAC spokesperson said.