'This is a sacred symbol': Holy Roller vandalized again

'This is a sacred symbol': Holy Roller vandalized again 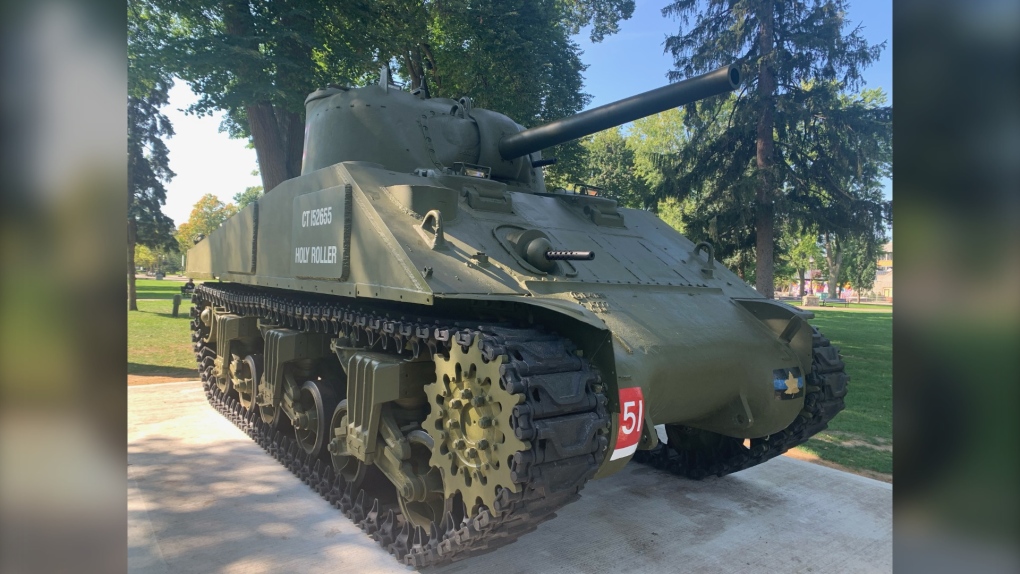 Months after London, Ont.’s famed Holy Roller was returned to Victoria Park after a year-long restoration, the WWII-era Sherman tank has once again been vandalized.

Over the weekend, it was discovered that a suspect(s) had taken an object and carved words onto the front of the tank.

While the damage is only visible up close and it’s difficult to make out what it says, it’s clear the famed WWII tank has once again been vandalized — and it’s something London Mayor Ed Holder can’t get his head around.

“To imagine that people would do this,” he tells CTV News London on Sunday. “I’ve said before, you can’t fix stupid, and that’s what this is all about.”

Holder adds that while Holy Roller will be fixed, there are no plans to move it to a safer location.

Damage is visible on the front of London, Ont.'s Holy Roller tank, as seen on August 28, 2022. (Brent Lale/CTV News London)

This is the second time since its restoration in the spring that the London icon has been vandalized.

In June, a 44-year-old individual was charged with mischief after allegedly vandalizing the tank with a grinder, causing $6,000 in damages.

Holy Roller is one of two Canadian tanks to fight in WWII until the end of the war.

“This point is, this is a sacred symbol for our city and one of our most respected citizens, so we have to honour it,” says Holder.

CTVNews.ca speaks with victims of stalking and harassment, and with advocates and legal experts who are calling on Canada to overhaul how it handles these cases from the police, to courts, and to the communities we live in.

CTV's W5 has been shown never-before-seen surveillance footage of Punta Cana International Airport from the night before a Canadian airline crew was detained after discovering duffle bags stuffed with 210 kilograms of cocaine in their plane's avionics bay.

Despite U.S. President Joe Biden's attempts to link WNBA star Brittney Griner's case to that of Paul Whelan, a former U.S. Marine arrested on espionage charges in 2018 and sentenced to 16 years in prison two years later, it became plain that Russian President Vladimir Putin would not budge.

Canadians sending parcels this holiday season may be surprised to see a steep surcharge on domestic shipping due to the high price of diesel.

From missing family time to making food, Canadians are cutting back amid inflation

Decades-high inflation and soaring interest rates have led many to take a closer look at their spending habits and, consequently, make some tough choices.

As nature talks unfold, here's what '30 by 30' conservation could mean in Canada

Prime Minister Justin Trudeau was unequivocal Wednesday when asked if Canada was going to meet its goal to protect one-quarter of all Canadian land and oceans by 2025. That goal, which would already mean protecting 1.2 million more square kilometres of land, is just the interim stop on the way to conserving 30 per cent by 2030.