'They are happy tears': St. Thomas, Ont. woman reunites with dog after being separated due to apartment fire

ST. THOMAS, ONT. -- It was an emotional reunion that had everyone in tears.

Kate Corless with her arms extended, waiting for her dog Kynzi to run to her.

Corless has only seen her five-year-old German Rottweiler three times since fire ripped through her St. Thomas, Ont. apartment on Oct. 25.

Over the past month, Kynzi has been boarded at Tail Waggin' Dog Ranch in Muncey, Ont.

"I don't come see her a lot because it's hard on her when I leave, and I always go away in tears," says Corless.

The owners of the ranch shot video of the reunion, while getting emotional themselves.

"They are happy tears," says Wendy Wallace, co-owner of Tail Waggin' Dog Ranch (TWDR) for the past three years.

"Kate is a customer of ours and we hate to see anything happen to our customers. Kynzi is a great dog, and it was nice to see her with her mom." 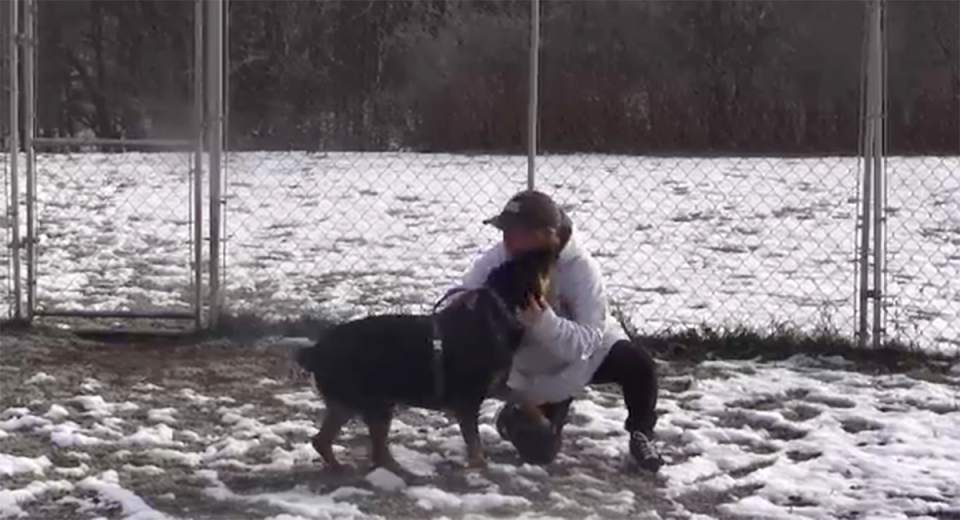 Since the fire, Corless has been staying in a St. Thomas motel. However their policy only allows for dogs to be there for seven days.

"When we first heard about Kate's fire, we let her know Kynzi would be staying here and we would not charging her," says Tim Raven, co-owner of TWDR.

At TWDR the dogs are socialized, and able to run on a large fenced property.

"We've been taking on dogs with a need from domestic violence, mental illness, people separating or being displaced," says Wallace.

"We take on one to two dogs and we hang onto the dogs for free, only asking the owners to buy food."

Corless continues to look for a permanent residence, but has struggled due to high rent rates, llow vacancy and owners not allowing pets.

"The big picture goal is for us to find a place to be together again, and get on with our lives together," says Corless.

Until then TWDR is happy to keep looking after Kynzi.

"We love having Kynzi here, but the ultimate goal is to get her to a forever home with her mom," says Raven.