ST. THOMAS, ONT. -- Frank Gatto took a deep breath before opening the door of his charred apartment in St. Thomas.

Emotions ran high as he first entered the building at 68 Hincks St. which was destroyed by fire Sunday.

"Oh man," was all he said as he struggled to hold back, before breaking out into tears.

"It's been rough with a lot of crying," says Gatto, who lived in the downstairs unit with his wife.

"The Red Cross and Victim Services Elgin have put us up at Comfort Inn and I can't thank them enough," he says.

"They gave us a Mastercard for $600 to help with clothing expenses and food."

Rentals are scarce around the province and St. Thomas is no different. However Gatto and his wife will have a place to go. Landlord Jay Okersee is putting him up in one of his other buildings.

"We want to help him out, and we have a vacancy on the other side of town. We'll be showing him the place Wednesday."

Gatto asys he's grateful that Okersee stepped up for him.

"We've been looking and there is nothing," says Gatto. "I even [went] to St. Thomas emergency housing and they have nothing." 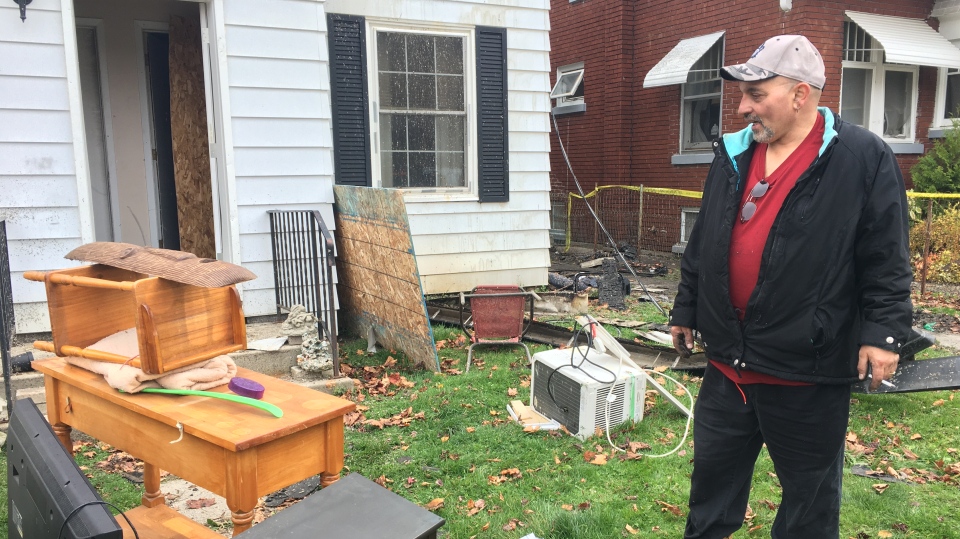 Upper-floor tenant Kate Corless tells CTV News she's going to check out a place in St. Thomas on Wednesday, while Gatto says the other two tenants are currently in London.

"It's very hard right now," says Okersee, who has over 30 units around the city.

"The incomes are low because these people have been here for a while. When they move into a new place though their expenses will likely go up."

Okersee says he'll be putting a fence up around the Hincks St. house Wednesday, and once everyone's contents are out, he'll knock the building down, and start from scratch..

Gatto was able to salvage some items from his front room which was one of the only rooms in the entire unit left intact.

"This really, really hurts," says Gatto as he carefully walked through his home, which had insulation and contents scattered.

"This is our bedroom," he said before pausing. "Seeing this, there is a lot of memories. We'll be starting all over again."