The invisible problem flushing $1.4 million down the drain each year in London

Almost half of the water flowing into sewage treatment plants is being treated unnecessarily.

City engineers estimate that stormwater now constitutes 44 per cent of the volume in London’s sewers and pollution control plants.

The report suggests an investigation is needed to locate where stormwater is entering the wastewater system and develop solutions.

“The goals of (the) strategy are to both reduce the risk of basement flooding and reduce and eliminate sewage bypasses and overflows (into the river),” reads the report.

Sources of “unwanted water” include:

“We know there is lots of raw sewage going into the Thames River during these extreme weather events,” explains Skylar Franke of the London Environmental Network. “So where is it coming from? I think it’s great that city staff are trying to figure this out and address it.”

It also adds about $400,000 to the utility costs to operate sewage pumping stations across the city.

Unwanted water takes a toll on many homeowners as well.

“It was 14 inches of water in the basement,” Mary Pilon recalls a severe sewage backup in her basement many years ago that destroyed precious items. “Going through your stuff to determine what has value is really hard. We lost out big time.”

Reducing the amount of stormwater infiltrating the sanitary sewer network of pipes will restore capacity and reduce backups into basements.

After their investigation determines the sources of unwanted water, city engineers will submit a business case to the next multi-year budget. 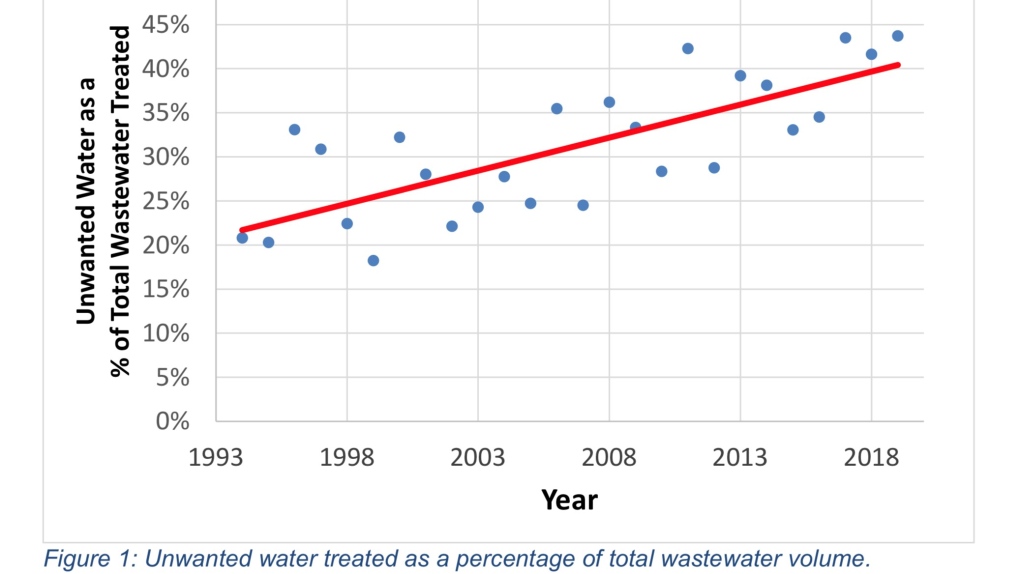 A table showing unwanted water treated as a percentage of total wastewater volume. (Source: City of London)Franke, who has used a municipal program to secure her own basement from sewage incursions, believes incentives for homeowners will be a crucial component of the strategy.

“A lot of people don’t know that their weeping tiles may be connected into the sewer system, so once they figure it out, being able to provide support with financial incentives is a great motivator to disconnect them,” she said.

“You don’t sleep, you tend to go down to the basement to check if it’s raining heavily. Not that there is anything you can do if it was coming up,” she said.

The report on unwanted water goes to council’s civic works committee on Dec. 14.