LONDON, ONT. -- A garage fire Sunday morning has forced a St. Thomas family from their home, but all four family members made it out unharmed.

Around 9:00 a.m., emergency crews were called to Windemere Place for the report of a house fire.

"When our guys arrived on the scene, it was fully involved and had worked its way back into the house," says Bill Todd, Chief Fire Prevention Officer for the St. Thomas Fire Department.

"Our guys got a great knock down on the fire, and lucky that all the people in the home made it out and were evacuated."

"When smoke alarms went off, she informed him and called us," says Todd.

"That's when he went around and opened the garage door and tried to put out the fire, but at that point it was going too fast." 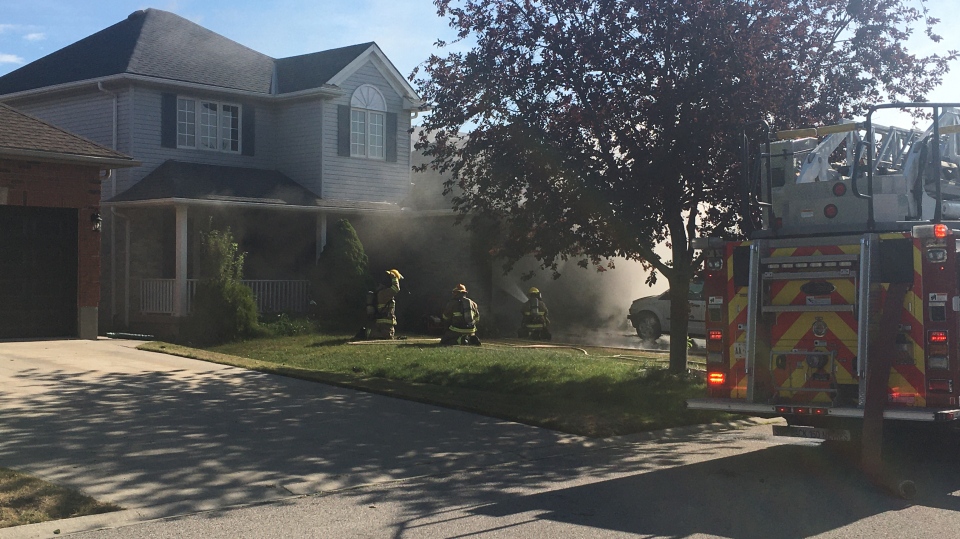 Neighbour, Tyler Burt, who lives a few doors down on the cul-de-sac came running to help.

"I just saw flames and black smoke and I tried my best to hold the individual out of the garage as he was trying to put it out," says Burt.

"My main goal was to have him stay out of that garage, because the flames were so big."

Burt knows the importance of letting the professionals handle the fire. He's had personal experience with a house fire.

"So I have the basic knowledge of knowing not to go back into that house."

An hour after firefighters first arrived on scene, the family, which consisted of two parents and two very young children, were being consoled by friends and relatives.

The mother told CTV News off camera that everyone is ok, after they spent time with paramedics on scene.

Todd says thanks to a 'fast knock down' by his firefighters, the neighbouring home to the east only suffered a bit of damage to the siding.

He says the fire isn't looking to be suspicious at this point.

"We don't have a full damage amount," says Todd.

"We'll investigate it once things cool down and hopefully come up with a cause."