That’s a lot of birds: Hundreds of thousands of birds captured on weather radar 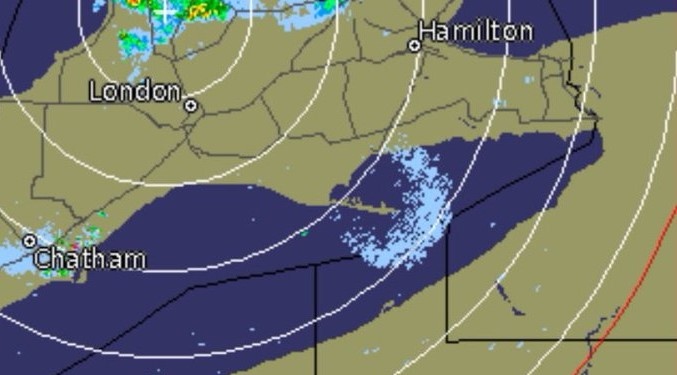 A massive amount of birds taking off near Long Point, Ont. was captured on weather radar on Sunday, Aug. 9, 2020. (Environment Canada / LPBO)

LONDON, ONT -- Astute weather watchers on Sunday may have noticed an odd formation on weather radars near Long Point, Ont., but it wasn’t rain… it was birds, a lot of birds.

The Long Point Bird Observatory (LPBO) tweeted the captured weather image on Sunday after the blip was first noticed earlier in the morning.

There was rain in other parts of the province so it may have seemed logical to assume that more rain was being picked up off the shoreline, but it was in fact hundreds of thousands of birds.

The phenomenon was created by a few hundred thousand swallows and martins leaving their roosts in the marshes surrounding Long Point.

According the LPBO they were heading out for the day to go foraging for food.

See that blue ring around Long Point on this weather radar image from early this morning? That’s not precipitation, it’s #birds! A few hundred thousand swallows and martins exiting their roosts in the marshes of Long Point to go out foraging for the day. #lpbo pic.twitter.com/ierVgxKPnK

There were similar events near the shores of Lake St. Clair, Point Pelee, and Wild Fowl Bay in Michigan.

Luckily, the birds who ventured to the U.S. are not subject to Canada’s quarantine rules.