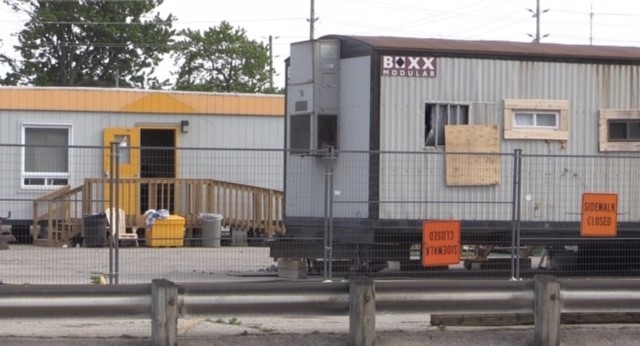 LONDON, ONT. -- It took until summer, but London’s temporary winter shelter expects to close next week with every resident offered permanent housing.

On Tuesday, the Community and Protective Services Committee at city hall was told that all 25 people staying in renovated construction trailers at the corner of York and Colborne will be offered housing with supports.

“Currently, the WISH To Be Home organization is in the process of finalizing agreements which will allow them to make offers of ‘housing with supports’ to the tenants at the temporary York Street shelter,” explained Kevin Dickins, Deputy City Manager of Social and Health Development.

The winter shelter, and a second that closed in the spring on Elizabeth Street, were offered as temporary space for people living in tents.

Dan Turner lived in the temporary shelter for several weeks before eventually securing housing with supports.

“It’s really helping me out. I’m actually working as a volunteer now and hopefully it will lead to some full time employment,” added Turner.

WISH To Be Home’s Sarah Campbell called the low barrier shelter a “made in London solution” that started many residents on a positive path towards housing.

Campbell encouraged politicians to continue providing low-barrier options for people who are unable to stay in traditional shelters.

“Our residents wanted it to be stated very clearly that the low barrier access, and the form of shelter provided, was really important to them as it related to accessibility and their ability to join.”

Civic administration will be issuing a Request For Proposals (RFP) later this year for the provision of more low-barrier housing.

Development of the RFP will begin by engaging community stakeholders in the upcoming weeks.