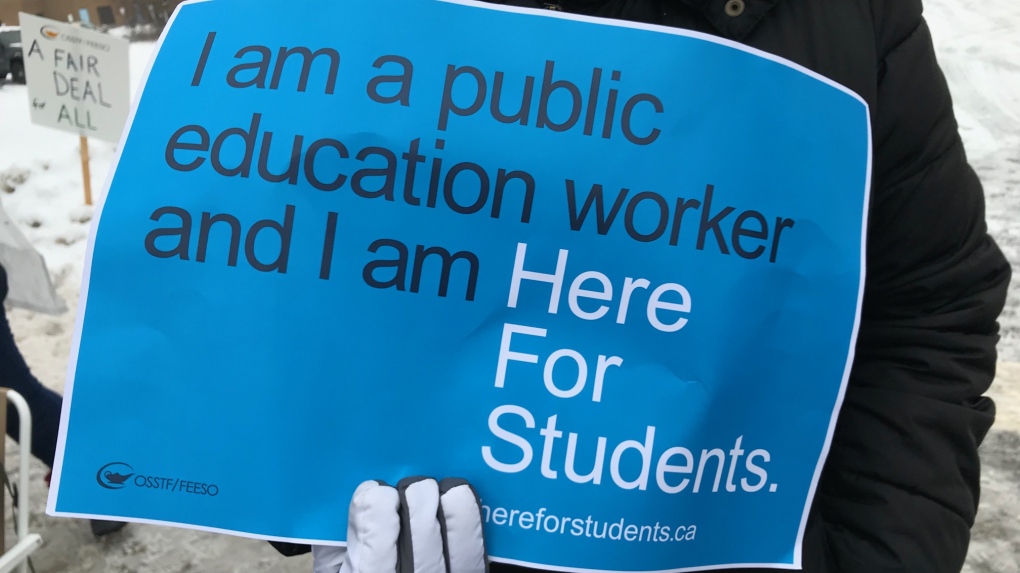 Tensions were already high between teachers and the government, with the imposition of higher class sizes and mandatory e-learning announced before the wage cap bill, and growing labour unrest over the past several weeks.

The court challenge marks the latest salvo, filed on the last day before politicians break from the legislature for two months after a session dominated by questions about education.

The Progressive Conservative government passed the law as contract talks were just starting, and the unions say it was an extraordinary interference in the process.

"This legislation is a direct affront to bargaining rights and the education profession," said Sam Hammond, the president of the Elementary Teachers' Federation of Ontario. "By attempting to legislate unilateral limits on compensation growth, the government is turning its back on the collective bargaining process."

The unions, representing teachers in public elementary, public high school, Catholic and French boards, say they are each filing a separate constitutional challenge because each of them have issues unique to their members.

"Let me be clear: this is not about money," said Remi Sabourin, the president of the French teachers' union. "It's about the right to negotiate without government interference."

The law caps all public sector salary increases at one per cent per year for the next three years. Treasury Board President Peter Bethlenfalvy said he is confident the law is constitutional. He noted that it still allows for employees to get raises for seniority, performance or increased qualifications.

"I think it's fair, it's reasonable, it's time limited and I wouldn't have proposed it if I didn't think it was defendable in the courts," he said. "It does not impede the collective bargaining process or the right to strike. It does not impose a wage freeze or a wage rollback and it does not impose any job losses."

Bethlenfalvy suggested that it was the most reasonable of three options to deal with the province's deficit -- it was either this, significantly increasing taxes, or firing front-line workers.

The president of the Ontario Secondary School Teachers' Federation said he questions the deficit figures the province has offered up as justification for the wage restraint and various budget cuts.

"There is no crisis that requires such an extraordinary interference in the bargaining process and a violation of our charter rights," said Harvey Bischof.

When the Tories came to power they projected the deficit to be $15 billion, but at the end of the 2018-19 fiscal year, it turned out to be half of that. Critics have long said that original number was vastly inflated, and have noted that almost $5 billion of that was due to changes in accounting methods.

The Ontario English Catholic Teachers' Association argues in its court filings that Bill 124 was introduced when teachers and education workers were actively engaged in collective bargaining.

"By introducing the bill at this time, the government pre-empted collective bargaining over one of the most important terms of employment for teachers: compensation."

This round of bargaining has been tense, with teachers angered by not only the wage cap legislation, but also by a government announcement in the spring that it was increasing class sizes and introducing mandatory e-learning courses.

The Tories have since scaled back the increase to class sizes and the online learning requirement, but not to the unions' satisfaction. They argue that those issues should have been raised in the context of bargaining.

"This legislation is just one of a number of actions taken by this government that have thrown the bargaining process into chaos," said Liz Stuart, president of OECTA. "While the language of this bill expressly provides that the right to bargain collectively will continue, the effect is to abrogate this right."

NDP Leader Andrea Horwath said the court challenge should not surprise the government, given that the courts struck down a 2012 law known as Bill 115 that imposed contracts on teachers, froze some of their wages and limited their ability to strike. The government was left owing teachers and education workers more than $100 million in compensation.

"We've seen this movie before," Horwath said. "Workers, they defend their charter rights. Bill 115 cost us $100 million minimum...and this is going to be exactly the same."

This report by The Canadian Press was first published Dec. 12, 2019.