PORT STANLEY, ONT. -- Just sit right back and you'll read a tale, a tale of a damaged ship. It started in a Lake Erie port, and set off for a five-hour trip.

"It's a 54-foot Greg Marshall-designed power boat that we built in 2007," says Manfred Kanter Jr., owner of Kanter Marine in St. Thomas, Ont. "We are just bringing it back to the shop for service work."

The giant ship was damaged while in the waters off the Greater Toronto Area, and was brought by water to Port Stanley with the owner paying the cost.

"There was a storm around Halloween in 2019 that went through eastern Ontario and Quebec that did a lot of damage," explains Kanter. "As original builder we were obvious choice to do the repairs."

They removed the sun top and the mast before it was loaded onto a truck driven by Yarmouth Crane, but still required an escort, including a hydro crew to help them on the trip.

"We have to move most of the wires here about two to three feet higher than the boat to make room for the guys to come through. Within the village of Port Stanley we have about 30 to 40 wires to raise up, and once we reach the edge of town Hydro One will take over."

Power did have to be shut down in a few places, and cable companies were also involved in the move, which took weeks to plan.

Here was the route for the trip:

As it moved out of Port Stanley onlookers gathered with cameras in hand to capture the sight.

"We've been watching this beautiful boat for the past year, and we've been following it all along, and just wanted to see it go out of town," says Richard Wright.

"I used to live down here, and knew it was happening, thought it would be great to get some pictures," adds Bob Chantler. 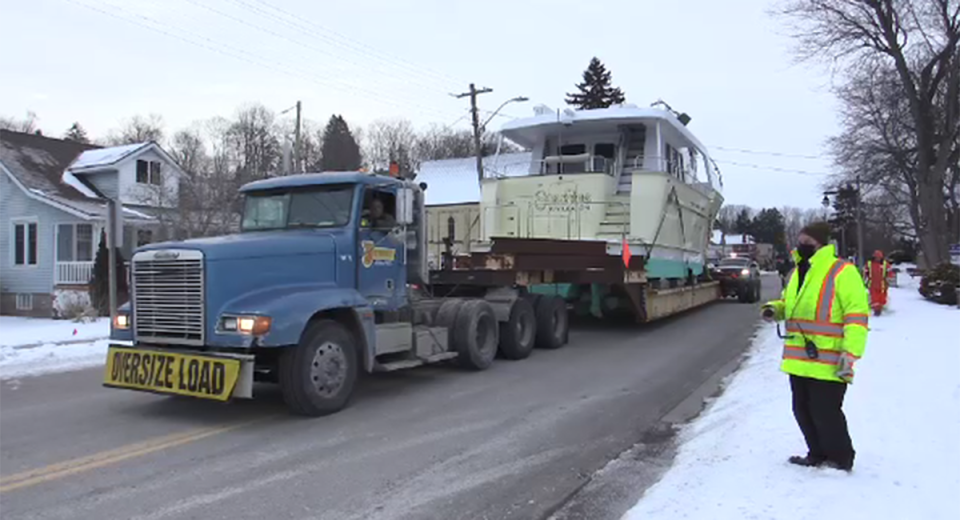 The owner of the boat remains unnamed, but it is a Canadian man.

And when it finally arrived in their workshop for repairs, Kanter says he has a plan to get it back to its owner in top shape.

"It needs a lot of cosmetic work, and structural aluminum work.'

In the end, it took less than five hours, from just before 8 a.m. until just after noon, and the move went off without a hitch.

"That is part of boat ownership, you take the good with the bad," says Kanter.

And once the repairs are complete, Kanter Marine will have to do the trip all over again the other way to get the boat back into Lake Erie.