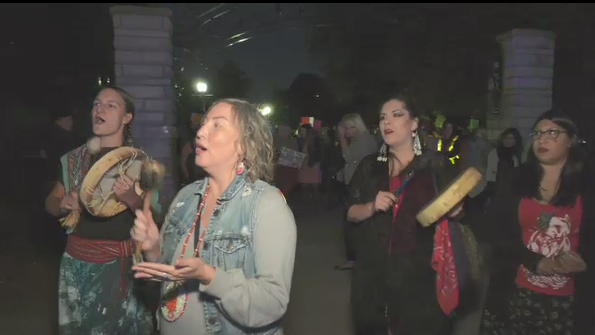 LONDON, Ont. - The annual Take Back the Night walk was held in London and cities across the country Thursday night.

The rally addresses gender violence and violence against women in the community.

Participants were spreading the message that all women need to feel safe without the threat of violence.

The foucs this year was on missing and murdered Indigenous women and girls. However, organizer Jenna Rose Sands also called for the London police to also do better in the treatment of women.

“The police haven't been as supportive of certain events at certain times, and I think we need to have some change. We need to prioritize,” she said.

“I don't want to prioritize hiding a sergeant's bad record, I would rather prioritize events like this, that are important. I think some good healthy discussion needs to be had."

The criticism of police comes on the same day as London’s police chief spoke at the police services board meeting to address an assault on a woman in custody three years ago.

Chief Steve Williams called the treatment of the woman deplorable. London police Sgt. Peter Paquette pleaded guilty in 2017 to assault under the Criminal Code and served a sentence.

He also pleaded guilty two counts of discreditable conduct and one count of using unnecessary force under the Police Services Act in December 2018.

The case has been put under the microscope in a local newspaper series.