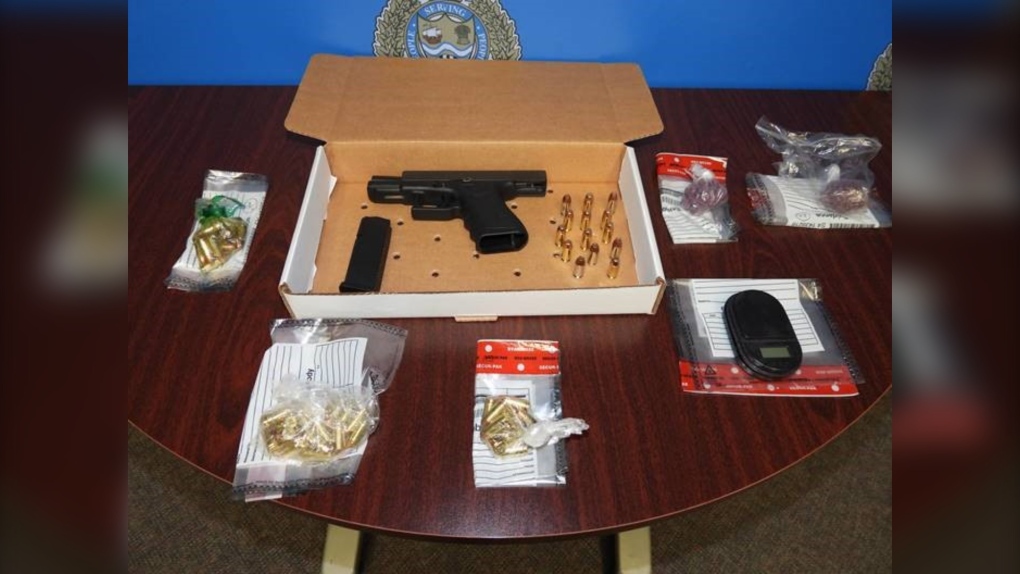 A handgun, ammunition and fentanyl were seized by Sarnia police after executing a search warrant on a suspect's vehicle on May 12, 2022. (Source: Sarnia Police Service)

The Sarnia Police Service is looking for a suspect who was previously in police custody but then released prior to finding fentanyl and a Glock handgun in a hidden compartment of the suspect’s vehicle.

Last week, members of the Sarnia Police Service Vice Unit began an investigation regarding an out of town individual suspected of drug trafficking within the City of Sarnia.

Police say that on May 11 at approximately 1:30 p.m., a suspect vehicle was seen by officers in the parking lot of a business located on London Road. When the suspect returned to the vehicle, officers attempted to surround the suspect but the individual attempted to flee police.

After a foot pursuit, officers were able to apprehend and take the suspect into custody. A police search found $3,795 in cash but no illicit drugs.

The suspect was then released, but law enforcement held onto the vehicle in order to execute a warrant to search for additional evidence.

On May 12 police received a search warrant to search the vehicle, where officers discovered a trap door and hidden compartment that contained a loaded 40-calibre Glock 23 handgun, ammunition and approximately 58 grams of purple fentanyl — with a street value of $11,600.

As a result of the investigation, 37-year-old Cheddi Emile Morris (AKA Coco) of Toronto is wanted by Sarnia police on the following charges:

Parents of boy, 2, among dead at Fourth of July parade shooting

Aiden McCarthy's photo was shared across Chicago-area social media groups in the hours after the July 4 parade shooting in Highland Park, accompanied by pleas to help identify the 2-year-old who had been found at the scene bloodied and alone and to reunite him with his family. On Tuesday, friends and authorities confirmed that the boy's parents, Kevin McCarthy, 37, and Irina McCarthy, 35, were among seven people killed in the tragedy.

Boris Johnson vows to stay on despite top tier resignations

British Prime Minister Boris Johnson says he plans to stay in power despite the resignations of two top Cabinet ministers and a slew of more junior officials.

A high school friend of B.C. teen Amanda Todd has testified he took action when he saw what he described as a “pornographic” picture of her on Facebook in November 2011.