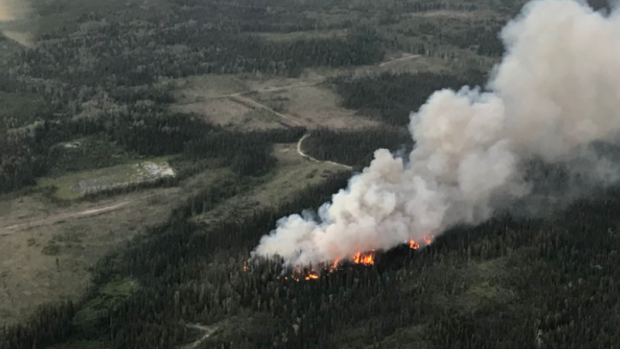 One of the dozens of new fires that broke out overnight is burning northwest of Vanderhoof. (BC Wildfire Service)

PENTICTON, B.C. -- RCMP in Penticton, B.C. say a man is in custody after fires were intentionally lit on Sunday afternoon.

A witness who called police said he saw a man start a fire before running away near the Channel Parkway Trail and Eckhardt Ave.

Officers arriving on the scene saw another fire starting south of the first one, and while patrolling the area looking for the suspect, they heard a man cheering.

After a short foot chase, the unidentified suspect was arrested and was allegedly carrying a lighter and balled-up paper towels at the time. Anyone who witnessed fires being set is asked to contact Penticton RCMP.

The incident comes as nearly 600 wildfires burn across British Columbia, displacing thousands of people and forcing scores more to be prepared to leave at a moment's notice.

Provincial officials also say there are 27 evacuation orders in place, affecting about 3,100 people, in addition to 43 evacuation alerts impacting about 17,900 people.

More than 3,400 personnel are fighting the flames in B.C., with crews from across Canada, and from Mexico, Australia and New Zealand.