ST. THOMAS, ONT. -- Eyes in the sky are coming to the downtown core in St. Thomas, Ont.

"Talbot Street is a gathering place and this is where business centers around," says Earl Taylor, chair of the Downtown Development Board (DDB). "This is where people are and we have done surveys and we want people to feel safe here."

Taylor has been pushing for the cameras for a couple of years now. He came up with the idea after watching British TV movies where they have CCTV everywhere.

"Criminal activity is happening down here," adds Taylor. "There are thefts, break-ins, vandalism, nuisance, in fact the security camera at my business got stolen."

Council fully endorsed phase one of the plan at their meeting Tuesday.

The equipment will now be ordered and they are set to join other major cities like London and Toronto with 24-hour video surveillance in their downtown core.

"The city endorsed the plan and it will begin to be implemented as soon as technology can be ordered and delivered, and then installed in a number of weeks," says Wendell Graves, city manager for St. Thomas.

When the equipment does arrive, construction on a fiber optic line from the camera locations to the police station will begin.

Police Chief Chris Herridge is hoping to have the St. Thomas Security Network (STSN) in place by the end of June.

They analyzed crime data over the past three years and determined that three intersections on Talbot St. will be the initial locations. They will be at Moore St, Flora St. and Hiawatha St.

The eight identified locations for CCTV cameras include: 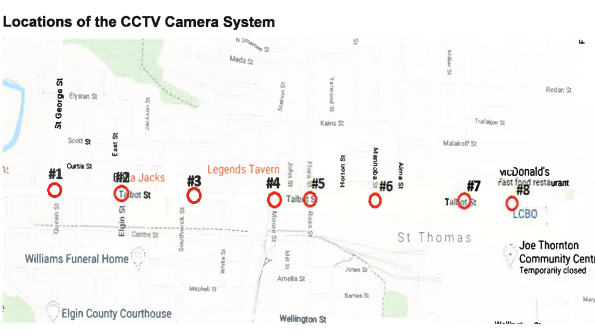 A map details the planned locations of CCTV cameras in St. Thomas, Ont.

"It’s another tool in toolbox for the St. Thomas Police Service (STPS) and our officers investigating crimes in downtown," says Herridge.

"It's not that our downtown is violent but we have crime and we can use it as a tool for us to enhance safety and security of downtown and expedite crime investigations."

STPS has recently boosted its presence in the core with a temporary satellite station and increased foot patrols. Cameras will be for additional support.

"It will predominantly be dealing with crime after the fact," adds Herridge. "If we have crime trend downtown we may have officers sit and watch that area if we are having rash of break and enters or some other crime, we can go to surveillance systems and download the video."

When the first three phases of the program are complete, a 2.17 kilometre stretch of Talbot Street will be under surveillance. The plan would then be to expand to the business district.

"We want to try to stay one step ahead of big city problems," says Joe Preston, St. Thomas' mayor. "It takes many larger communities a long time to do this, and we are trying to do it at early time in city's development, and make St. Thomas that much better."

The issue of privacy has been brought forward since plans began for this project.

However, officials point to cameras in most retail locations and say for security reasons, this is no different.

"We are on camera anytime you walk into a big box store," says Herridge. "We just need to follow proper guidelines set by privacy commissioner.

"Most of the comments that we've had on Facebook about this opportunity about this have been positive...It's going to make Talbot Street and downtown St. Thomas a much safer place and that's what we are looking for."