About 100 students showed up at Lucas secondary school in London Wednesday, showing their support for a fellow student who was sent home for her attire on Monday.

Laura Anderson was wearing a loose fitting tank top with a bandeau and bra underneath, and ripped jeans - and was told to go home and change because her top was too sheer.

"We don't want to disrupt classes, but we're just doing this more to empower ourselves and to make everyone know together we are a strong community that believes that dress codes should be changed," says Anderson.

Student Ashlyn Nicolle started an online petition that she thought would garner a few hundred signatures, but as of Wednesday evening, the petition directed at the school administration had climbed over 3,400 supporters.

"Hopefully, a compromise. Maybe if we could just sit down with them and just talk about how we can make some changes. Make everyone happy," says Nicolle.

CTV London reached out to the school again Wednesday for comment but were unsuccessful.

"It's not us working against the administration, it's us wanting to work with them. And make this a change in our system," says student Hahn Ngo.

Superintendent Sheila Powell says they come up with a dress code for schools individually and that they're willing to work with students and parents to do a review of it.

"Just as much as I have a lot of support behind me, I also have alot of criticism, and a lot of people have really opposing ideas. A lot of condecending have been made towards me, but I truly believe this is an issue that with my fundamental core I believe is right," says Anderson. 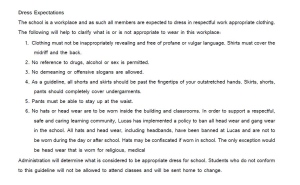