About 50 students took part in a walkout and rally in front of the school on Wednesday morning.

The concerns stem, in part, from the handling of a male student who is now facing a number of sexual assault charges.

The Aylmer Police Service said on Sept. 22 they received a complaint of three separate incidents involving the male.

Police said the first case occurred on April 30. They say that at the time, a 15-year-old male from Springfield was speaking to a 16-year-old female student inside East Elgin Secondary when the he touched her buttocks and attempted to touch her breast before she stopped him.

Subsequent incidents occurred in June and August. The second involved a 14-year-old female who told police she was assaulted on three separate occasions in which the male attempted to touch the victim's breast and vaginal area.

The third incident also involved a 14-year-old female. In that case, police said the male showed up at her Aylmer residence uninvited and also attempted to touch her inappropriately. 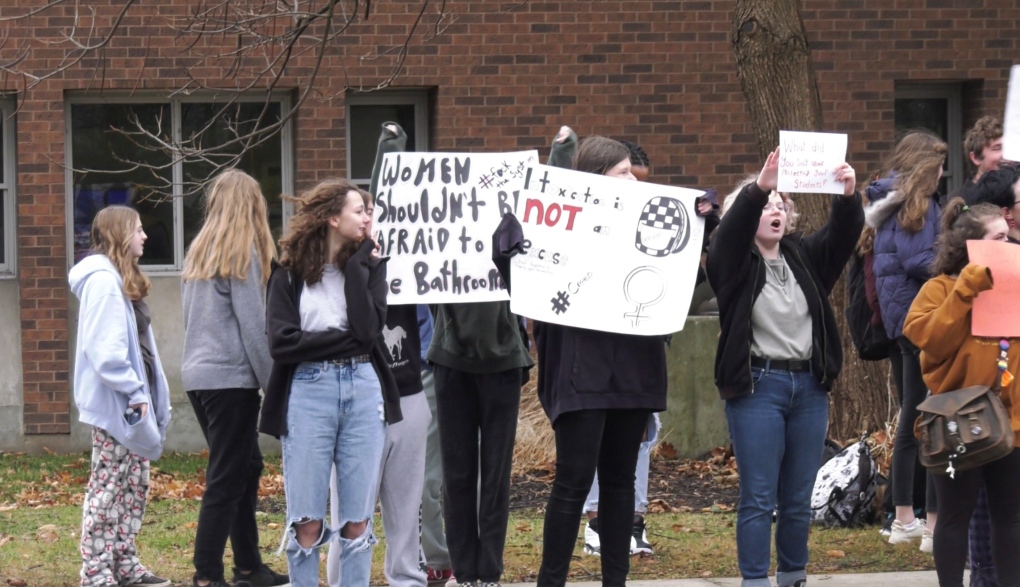 About 50 students at East Elgin Secondary School in Aylmer, Ont. took part in a walkout on Nov. 30, 2022 to protest a number of disturbing alleged incidents, including sexual assault. (Gerry Dewan/CTV News London)

Aylmer Police Deputy Chief Kyle Johnstone said that while the case is making its way through the courts, the accused is now under court ordered restrictions preventing him from attending the school.

Johnstone wants to assure students that police are acting on concerns if it’s a criminal matter, and said, “Unfortunately with things, such as school-age children, the Youth Criminal Justice Act, even if there are charges, [it] really restricts us in what we’re able to release.”

Those who took part in the rally, consisting of primarily female students, said there have been other troubling incidents in the school.

"Recently there was a male student who was caught in the girl's washroom," said grade 12 student Kendra Underhill. "There just didn't seem to be a lot done about it or action that could have been taken wasn't done and we're tired of not feeling safe in our own school environment." 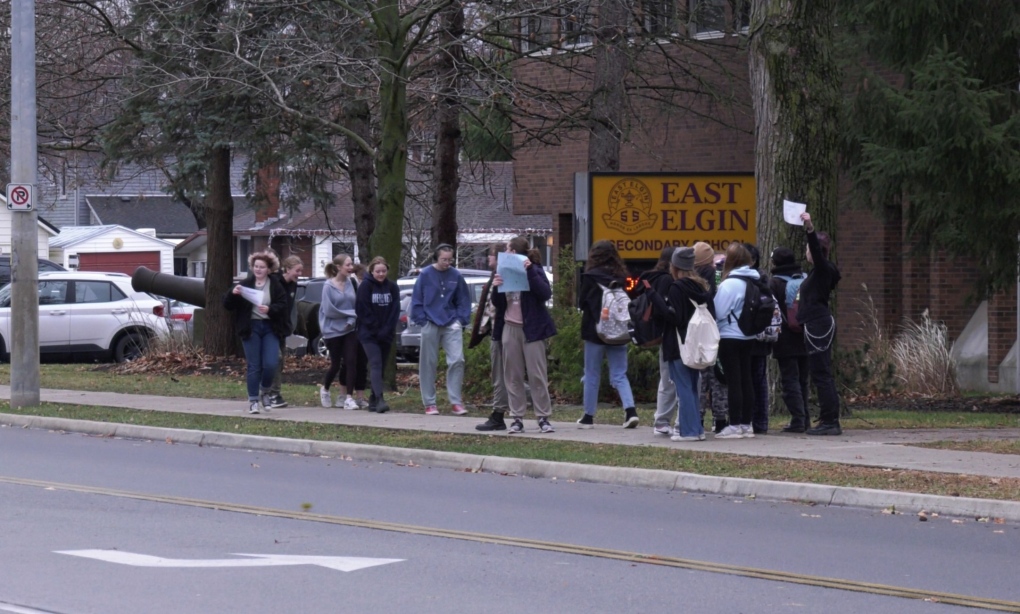 About 50 students at East Elgin Secondary School in Aylmer, Ont. took part in a walkout on Nov. 30, 2022 to protest a number of disturbing alleged incidents, including sexual assault. (Gerry Dewan/CTV News London)

In a statement, Dennis Wright, the Thames Valley District School Board’s Superintendent of Safe Schools and Well Being, said, “We are supportive of student-led initiatives that demonstrate engagement in positive change and using their voice in support of other youth in our communities. We encourage students who need support to reach out to a caring adult. School based supports to support mental health and well-being are also available.”

The statement continued, “We are committed to ensuring safe, positive learning environments at all of our schools, which is reflected in our policies and codes of conduct as well as in our curriculum.”

Meanwhile, Underhill said many students still don’t feel confident that their concerns are being addressed, “They, kind of, just say ‘Oh, yeah. We’ll deal with it. You just got to trust us that we’ll deal with it.’ There’s no real follow-up given with that person or that girl that feels unsafe or that girl who’s been assaulted.”

Students hope the walkout will bring further dialogue and changes that will make them feel safer.

Members of Parliament are making their way back to Ottawa ahead of resuming sitting on Monday, as the city prepares to mark the one-year anniversary of the arrival of 'Freedom Convoy' protesters.

Video released publicly Friday shows the husband of former U.S. House Speaker Nancy Pelosi fighting with his assailant for control of a hammer moments before he was struck during a brutal attack in the couple's San Francisco home last year.

What is going on with Bill C-11, the government's online streaming legislation?

The Liberals have spent years trying to pass online streaming legislation and now the current iteration, known as Bill C-11, is closer than ever to passing. With a potential parliamentary showdown ahead, here's what you need to know about how the contentious Broadcasting Act bill got to this stage.

Though you won't be able to sit on the old, cracked pleather benches and take in the thick smell of gravy and fries, while the gentle sound of clanging dishes provides the soundtrack for your lunch, Zellers plans to roll out food trucks for those 'craving a taste of nostalgia.'

'We must meet this moment': Trudeau says in speech to Liberal caucus

Prime Minister Justin Trudeau called on his Liberal caucus to meet the moment on Friday, as Canadians deal with the high cost of living, a struggling health-care system and the effects of climate change.

Pamela Anderson is addressing discussion about a story regarding her 'Home Improvement' co-star Tim Allen that is part of her new memoir, 'Love Pamela.'

What should Canada be doing about climate change? 25 recommendations

The national Net-Zero Advisory Body released 25 recommendations Friday for how Canada can adjust its climate plan to reach net-zero emissions by 2050 — a goal that the country is not on track to reach right now, according to the report.

The federal government posted a budgetary deficit of $3.6 billion in the first eight months of the fiscal year.