After a day filled with watches and warnings for London and its surrounding counties, there were a number of reports of damage in the region.

Environment Canada had issued numerous tornado warnings as well as severe thunderstorm warnings as the storms moved across southwestern Ontario.

The storms were part of a system moving in from the United States that brought showers, thunderstorms, heavy downpours, hail, lightning and gusty winds.

Environment Canada was also warning of the risk of tornadoes.

While no tornadoes have been confirmed, some damage has been reported in the Angus area, southwest of Barrie.

Police are reporting at least 20 homes, possibly more, with significant damage including damages roofs and walls.

OPP Sgt. Peter Leon says there have been minor injuries reported, but no life-threatening injuries as a result of the storm.

Officers were going door to door in the worst-hit area to ensure no one had been left trapped or injured.

Damage from strong winds was also reported in the Wingham area, where one driver is lucky to be alive after the storm brought down a hydro pole and a tree on top of a car on Maple Street.

There are also reports of golf-ball-sized hail in Kincardine and a possible lightning strike at a house near Chesley.

The Walkerton and Owen Sound areas were also hit by heavy winds, though it is unclear if there has been significant damage. 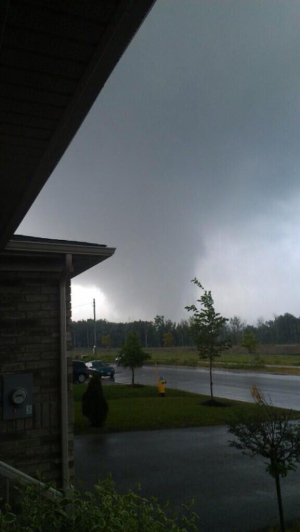