In what could have been an explosive situation, staff at a London comics and collectables store managed to keep their cool Tuesday when two men allegedly attempted to sell high-value stolen trading cards.

Staff at LA Mood Comics & Games didn’t know at first, but the two would-be sellers came armed with a set of brass knuckles and a suspected hand grenade.

“We do know that whenever there’s a situation where people are trying to sell us stolen goods there’s always a potential issue, and we try to deal with it by being calm,” said store owner Gord Mood.

He explained to CTV News how staff matched up the serial numbers on the Pokeman cards and other collectables and realized they had been stolen in break-ins at stores in Sarnia, Ont. in recent weeks.

Mood says they discreetly contacted building security at 100 Kellog Lane, where the store is located, who in turn called police. 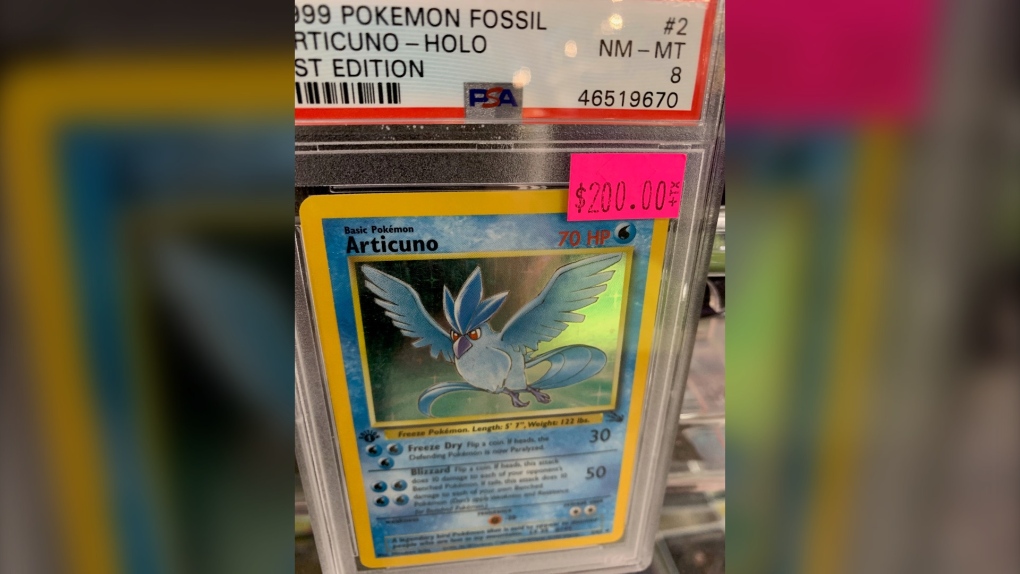 A Pokemon trading card similar to the ones stolen. (Bryan Bicknell / CTV News)Police arrived within moments, searched the suspects, and located the weapons.

A routine stolen goods investigation quickly turned into something potentially much more dangerous.

“Police quickly shut down the surrounding streets and evacuated the buildings in the area,” said London Police Cst. Sandasha Bough. “Members of our explosives disposal unit attended the scene and determined that the suspected hand grenade was inert.”

Police could not say where the suspected grenade came from or how the men came to be in possession of it.

The stolen trading cards were determined to be from two separate Sarnia break-ins, one of them at a business on Jan. 7, and another at District Beta on London Line in Sarnia on Dec. 20.

“I feel for the guys that were there at LA Mood yesterday, I am eternally grateful for them and what they did,” said Kelly.

“They could have just turned a blind eye, but they took matters into their own hands to help us out and help this whole community. To be able to kind of keep your cool and stall that long when you think that the people standing in front of you are criminals, then that’s a… I guess a scary thing to do,” he added.

Kelly said he’s not sure how much of the merchandise that was recovered is his, and how much belongs to the other Sarnia business. He said he’ll be glad to get some of what was stolen returned.

Prince Charles says he and Camilla, the Duchess of Cornwall, were departing Canada with 'heavy hearts' and a deeper understanding of residential schools after their royal visit wrapped in the Northwest Territories.