LONDON, ONT -- It's a drive to keep cancer patients alive.

The 23-year-old aspiring doctor from Chatham, Ont. passed away in Aug. 2020 after a courageous two-year battle with acute myelomonocytic leukemia.

"There is a culture of blood donation, as we see it getting promoted on social media and in the news, but there is not enough promotion around stem cells," says Brady Park, president of WUSCC.

The club felt it was very important to carry on the work McGlynn was doing during her cancer battle.

"Ever since she was diagnosed she was advocate of stem cell donation because she not only cared about herself but other patients who were going through same thing," says Park.

"She wanted for other people to not go through struggle of finding stem cell match because it was difficult for her." 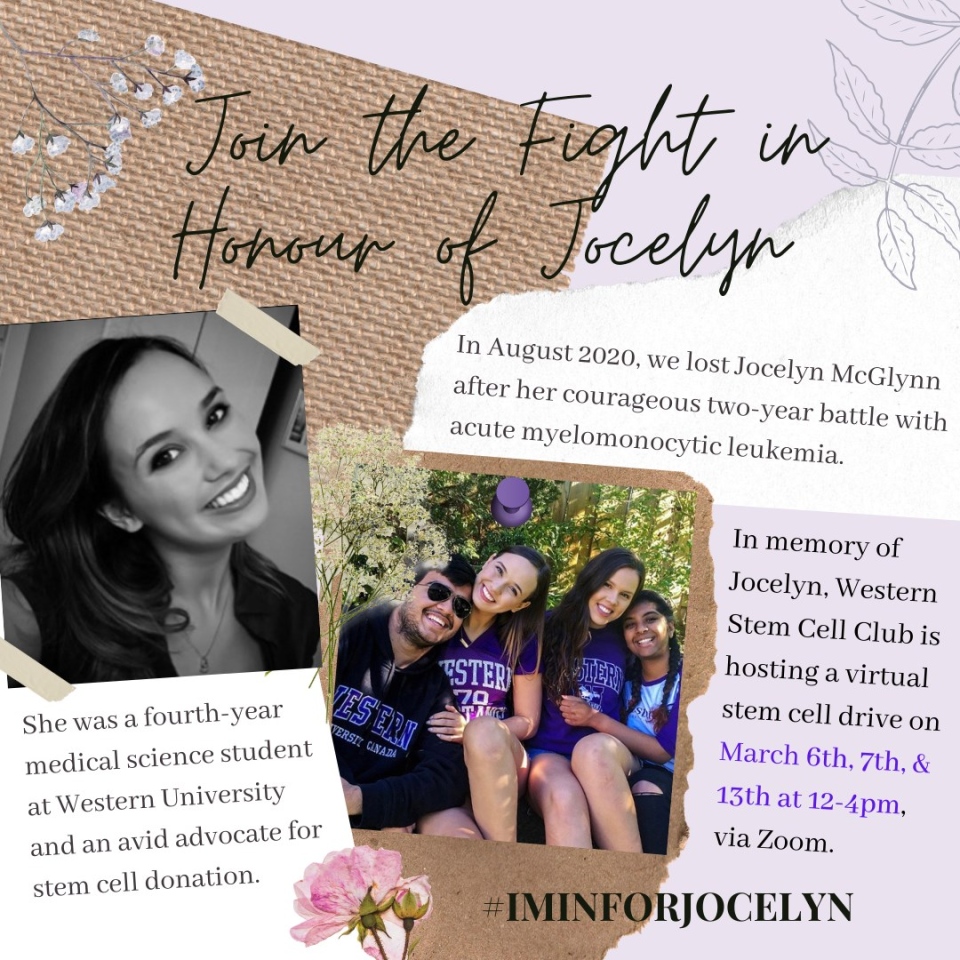 McGlynn was an advocate who publicly documented her struggles to find a stem cell donor match.

Friends and family have produced a video remembering Jocelyn.

With help from her family she organized many stem cell drives and made videos on many platforms to raise awareness about donations.

Canadians are eligible to sign up as potential stem cell donors if they are between the ages of 17 and 35 and in good general health.

There is also a special need to recruit male donors (associated with improved patient outcomes) and ethnically-diverse individuals (since patients are more likely to find a match from within their own ethnic group). To sign up as a potential donor, click here.

"We have a lot of work to do to address disparitiy in access to stem cell donors," says Dr. Warren Fingrut, a hematologist and founder of Stem Cell Club.

"Over 70 per cent of Caucasians can find match in the world. However Black, Indigenous, Southeast Asian and mixed-race peoples have a difficult time. They average only 20-30 percent to find a match. We have a lot of work to do to engage and work with ethnic peoples to consider signing up as stem cell donors."

The pandemic has hindered both Canadian Blood Services and WUSCC's ability to recruit donors in person. That's why WUSCC is holding virtual awareness campaigns where volunteers will answer questions and even help people register.

"We have to increase the amount of genetic information on the registry," says Park. "You could be a one-of-one match for a patient and you can directly save someone's life."