Star studded class of hall of famers in St. Marys for induction weekend

Baseball royalty was in St. Marys, Ont. Saturday as hundreds of baseball enthusiasts flocked to Stonetown to see their sports heroes up close in an intimate setting.

Induction weekend was back at the Canadian Baseball Hall of Fame after a two-year absence due to COVID-19, and four more players were inducted.

Francis of nearby London, Ont. had the loudest cheering section, as members of 11U North London Nationals Baseball Team surprised him at the ceremony. The players are teammates of Francis’ son. 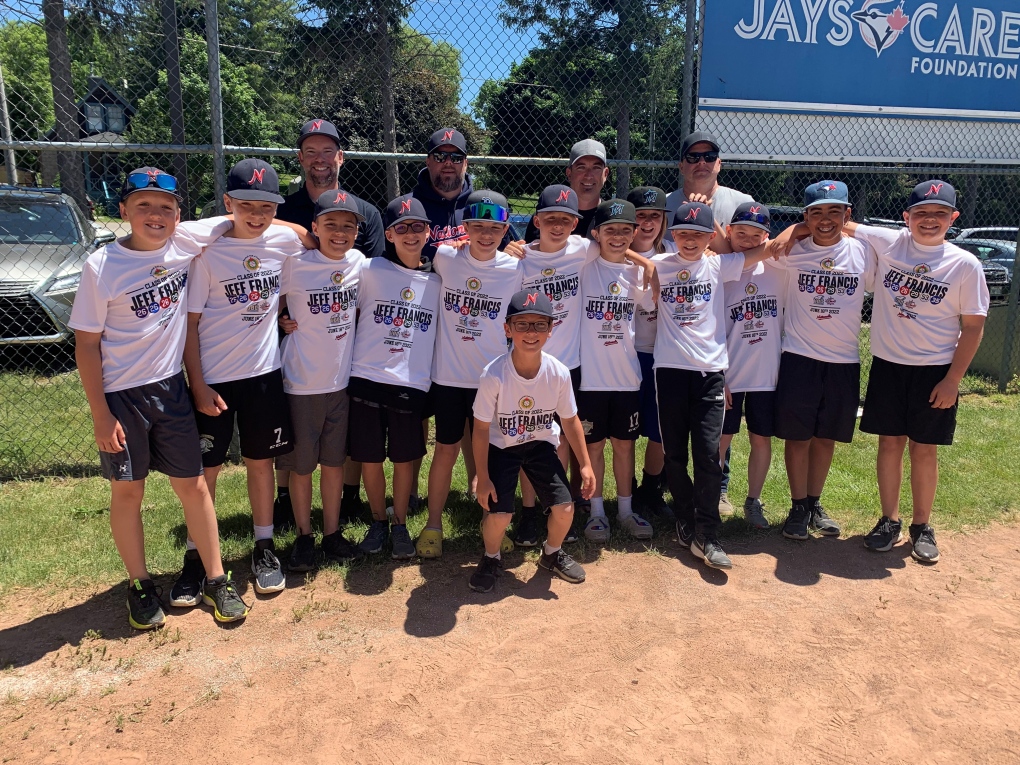 Players from the 11U North London Nationals surprised their coach Jeff Francis by attending his induction into the Canadian Baseball Hall of Fame on June 18, 2022. (Brent Lale/CTV News London)“We came here to surprise coach, and we made these shirts for him,” said Ty Trowhill, a member of the team showing off the shirts they made.

“I think he’s a hall of famer because he throws really hard, and he teaches us how to throw different pitches and he’s a great coach,” added Hunter Trowhill, a member of the 11U team.

Francis’ fellow coaches with the Nationals thought it was important for the boys to be at the ceremony.

“It’s exciting to be here for all of us to be here,” said Andrew Pankratz, an assistant coach with the Nationals, who coaches alongside Francis.

Francis last pitched in the MLB in 2015, so these boys were just four years old and never saw him actually play.

“They know him as Miles’ dad or coach Jeff,” said Pankratz. “We tell them all the time that you know, he's a starting pitcher, he pitched in the World Series, but they just know him as a coach, right? He's always there to support them, teach them how to pitch, teach them to play the game of baseball and they’re glad to have him here.”

Francis moved to London in 2003 after meeting his future wife at the University of British Columbia. Many of those who know him didn’t know him as a ballplayer. 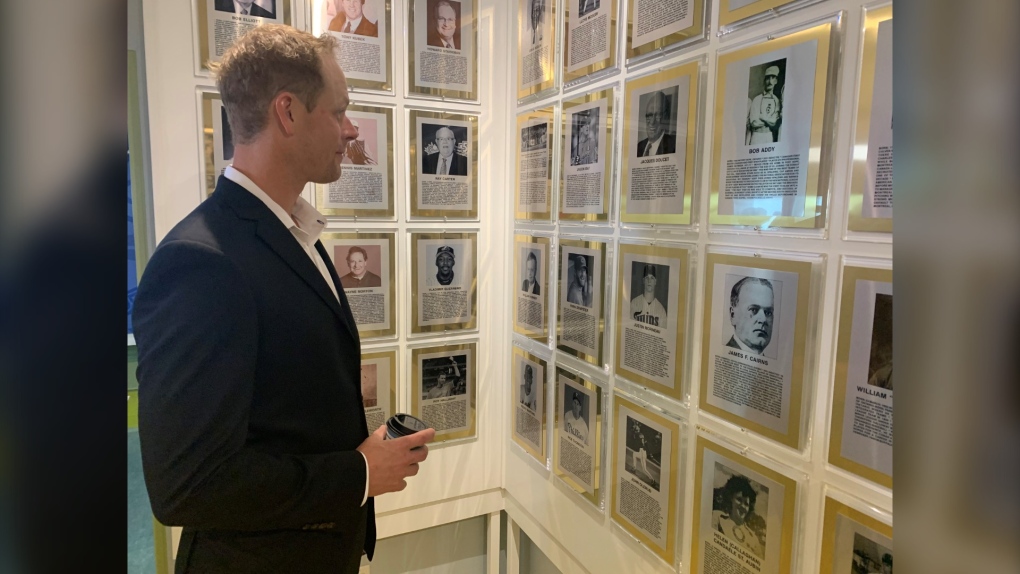 Justin Morneau was in awe as he entered the plaque room in his first trip to the Canadian Baseball Hall of Fame. Morneau was inducted into the hall on June 18, 2022. (Source: Brent Lale/CTV News London)“It's sort of a life I've made for myself since having quit playing,” said Francis. “A lot of the new friends I've made and people I've got to know you know after baseball so that part of me so maybe to see me on the stage is different for them.”

Francis grew up playing for the North Delta Blue Jays in B.C. He was a minor baseball teammate of Justin Morneau who was inducted Saturday beside his long-time friend.

“To share that stage with Jeff and to be to be up there with him and knowing each other for so long it’s crazy,” says Morneau, who was at the hall for the first time Saturday, and in awe of the plaque room with all the inductees.

“We were roommates in high school, so it's crazy to think that we're here to Canadian baseball players in the same place at the same time. There's something special about playing with a guy when you're 16 and 17-years-old and all of a sudden you're fast forward 20 years and we’re on the stage together,” he said.

Duane Ward has represented the Blue Jays as an ambassador on many occasions in St. Marys. This year he was in town in a different capacity as an inductee.

“Today it's as a participant so it's, it's quite a feeling,” the former Jays relief pitcher said. “I'm in the New Mexico Sports Hall of Fame, and in my high school hall of fame and stuff, but nothing like this. This, this right here is this is the apex of a career.”

A rare appearance brought many Expos fans to St. Marys to catch a glimpse, and hopefully an autograph.

Prior to the ceremony Martinez donated his 1997 Cy Young Award to the Hall of Fame to put in their Expos display. 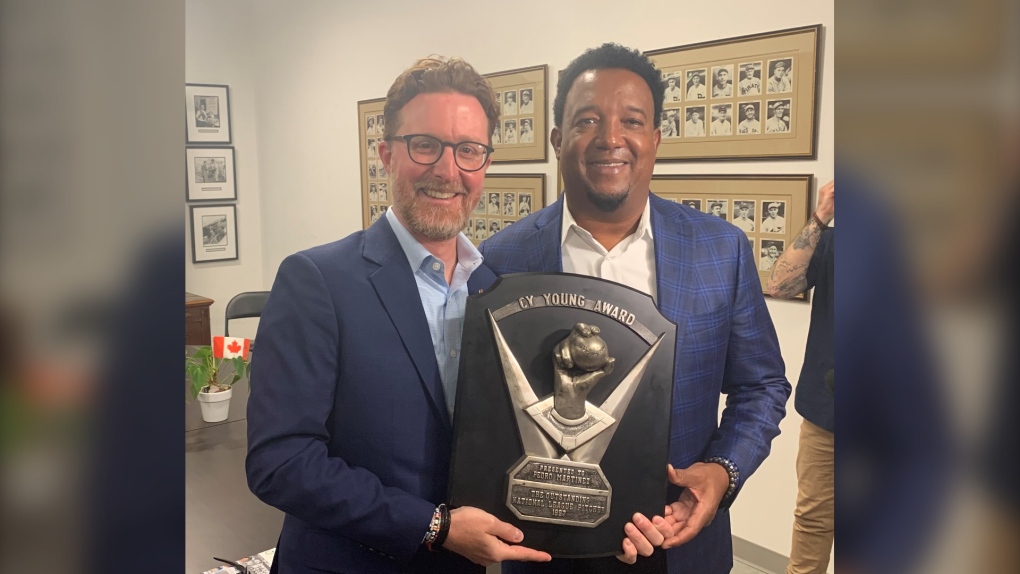 Pedro Martinez (R) presents his 1997 CY Young Award to the chair of the Canadian Baseball Hall of Fame Jeremy Diamond on June 18, 2022. The award will be on display at the Hall of Fame. (Brent Lale/CTV News London)“My heart is full joy just to know that Canada wants to recognize me even though the Expos don't exist anymore,” said Martinez who is also in the Latin Baseball Hall of Fame.

“I’ve always been very vocal about Canada and how great Montreal was how much of a baseball city Montreal was. Now to become part of Canada, forever knowing that Canada is recognizing my career, it’s a huge honour,” Martinez added.

Martinez reflected on his time in Montreal, and even 18 years later, believes he would have won a title with the Expos.

Police in Halifax say they made an unspecified number of arrests during a massive street party involving thousands of people near Dalhousie University.

King Charles III has decided not to attend the international climate change summit in Egypt next month, fuelling speculation that the new monarch will have to rein in his environmental activism now that he has ascended the throne.

Police firing tear gas after an Indonesian soccer match in an attempt to stop violence triggered a disastrous crush of fans making a panicked, chaotic run for the exits, leaving at least 125 people dead, most of them trampled upon or suffocated.

How a deadly crush at an Indonesia soccer match unfolded

A soccer match at a stadium in Indonesia has ended in disaster, with at least 125 people killed and more than 320 injured after police sought to quell violence on the pitch, authorities said on Sunday. This is how events unfolded.

Marking one month as a judge on the Supreme Court of Canada, Michelle O'Bonsawin, speaks with Evan Solomon about why she wants people to see her as a judge first and the first Indigenous justice to sit on Canada's highest bench, second.

Hurricane Orlene grew to Category 3 strength on Sunday as it headed toward Mexico's northwest Pacific coast between the tourist towns of Mazatlan and San Blas.