ST. THOMAS, ONT. -- If the province gives the go-ahead for sit-down restaurant service this summer, there will be a couple new street patios in St. Thomas, Ont.

"It will encompass the area around our door, to the edge of where our building would be," says Sam Aboumorad, owner of the St. Thomas Roadhouse.

His Talbot Street business is one of four which would benefit from a pilot project from the St. Thomas Downtown Development Board (DDB).

"There would be a nice fencing around it, and room for about four to five tables, which would be something different for us."

Consultant Andrew Gunn is the driving force behind the concept and says, "The main goal is to add new life and vibrancy to the downtown."

"The city has policy on complete streets, and we looked at not just cars, but people. We wanted to really make these dynamic areas downtown with patios and it is a great fit for us," he added.

The patios would be seasonal in nature, and coordinated by the DDB.

Funded by $50,000 from an anonymous donor, Gunn contacted Hamilton, Ont. based Pop-Up Patios, a company that has been installing them in major cities around the province.

"I travel a lot with my consulting firm, and we've noticed these patios a lot, especially in Hamilton," says Gunn.

"It's cool in my line of work to see donors and business improving public spaces. A lot of these types of ideas have come from the teenage journalists I work with, and them thinking why can't we do this in St. Thomas?"

Gunn credits the current city council and the DDB, who are receptive to innovative and fresh ideas.

The patios go right to the edge of the sidewalk, and the city would eliminate a couple parking spaces to allow for pedestrians. 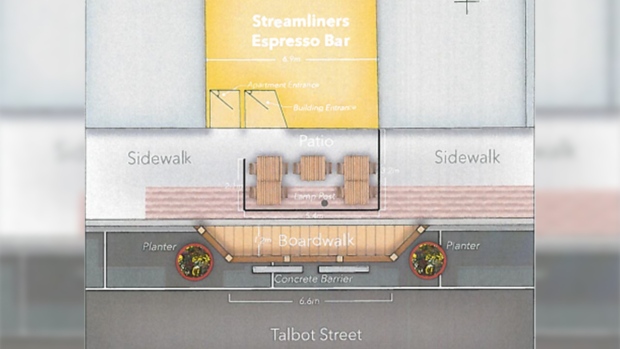 A concept design for pop-up patios from the City of St. Thomas agenda.

Mayor Joe Preston is on board with the idea, "What comes first...the vibrancy because there is patios, or patios and then the city is more vibrant?"

"Let's do it all at the same time. We can make the city grow as a small community but a small vibrant community with a great downtown."

Aboumourad says he sees similar set ups in other cities, and is often asked him about a place to sit outside during the nice weather.

He would still need to apply for a liquor license, but calls the program "amazing" because all the costs are covered by the DDB.

"It would be amazing to drive down Talbot Street," says Aboumourad. "Imagine seeing nice patios here, with more people out and about. When you see people outside, there is more energy in a downtown."

Gunn and the DDB originally had this idea last year, but the project didn't come together. They are hoping to try it again, but are still waiting for the province to lay out some rules. His hope is to have them in by July 1.

"Our perspective is we want to support restaurants and downtown," says Gunn. "If the province gives go-ahead to resume sit-down service, we wanted to have all the details in place to have patios on the street."

Preston feels that as the city begins recovery from COVID-19, outdoor eating may be one of the first places to look at.

"It's a given, that this would be a great thing even in the best of years, but in this year maybe even more so," says Preston.