Special delivery: A message from an essential worker 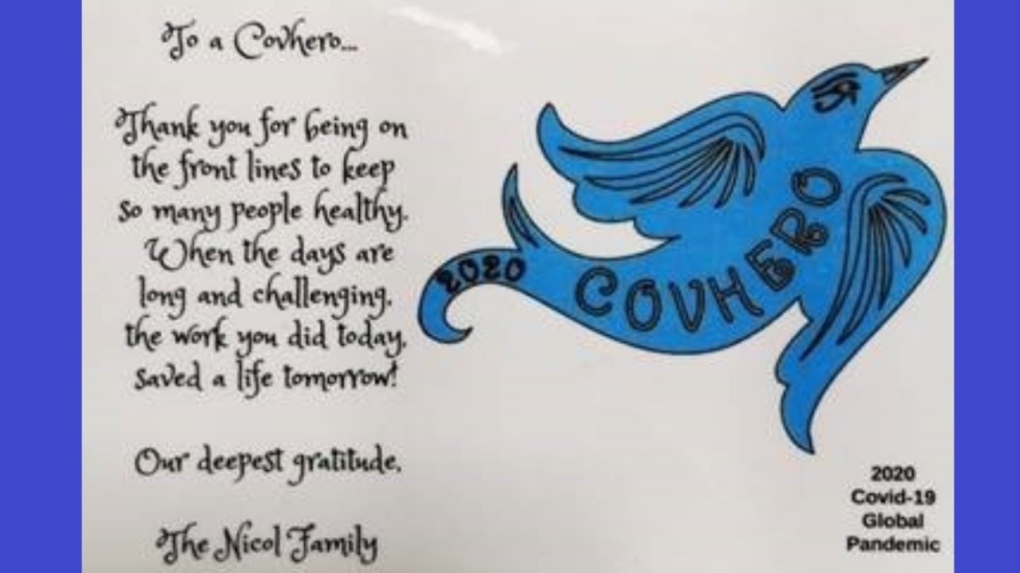 A letter left for Jerith Laberge, a dedicated UPS driver

LONDON, ONT. -- Jerith Laberge is a dedicated UPS driver, keeping the Canadian economy going by supporting the movement of goods. He has been with the company for 14 years, and has spent the past decade as a UPS driver in Brantford.

Whether it is critical medical supplies that need to reach front-line health-care workers or care packages to friends and family in need, delivery services from people like Laberge have become essential.

During a regular nine-hour shift, Laberge usually has roughly 160 stops per day. In the last six weeks, that number has doubled.

Recently, he recalls a stressful situation during his 177th stop - in the middle of his shift - that turned his entire day around.

"I was grabbing a big box of groceries from the truck, and it completely came apart. All the food fell out. I reached a breaking point, and thought I was done for the day," said Laberge.

He managed to get everything back into the box, taped it up, and brought it to the front door of the home. As he put the box on the porch, he noticed a note taped to the door.

It read,"To a CovHero, thank you for being on the front lines to keep so many people healthy. When the days are long and challenging, the work you did today saved a life tomorrow."

Laberge says this brought tears to his eyes and it was all he needed to get through the rest of his shift.

He went back to his truck and grabbed the second box to deliver to the same house. At this time, the owners had come out to grab the first box from their porch.

While keeping a safe distance, he thanked them for the note. And in return they told him how much they appreciated what he was doing. A choked up Laberge smiled back and left.

UPS drivers like Laberge are on the job every single day during this global health emergency.

But they are not just drivers. Laberge is a father of two, his youngest only six weeks old. When he is out on his stops, he is constantly thinking about keeping himself safe, while managing a truck that has double the usual volume.

UPS has put safety measures in place that include a daily wipe down of company trucks and equipment, enforcing the two-meter rule, and distributing masks and gloves to all employees.

"We love being around our customers in regular circumstance, but during this time, as much as we miss the social interaction, we wish costumers would stay inside their home, and not come out to great us, this is not safe," said Laberge.

Drivers like Laberge, want to thank the community for their generosity, empathy and humanity that keeps them moving during this unusual time.