It's a system failure, thousands of people suffering from mental health issues who can't access proper care and instead end up in emergency rooms or even jails.

And once there, they aren't getting the treatment they need and are instead being pushed into even more stressful - and costly - situations.

Very few people have heard of Connex Ontario, but if you've ever called a 1-800 number for mental health, addiction or gambling you've probably dealt with them.

It's a small organization that handles distress calls, but also tracks mental health care services and their availability across the province - and if more governmental agencies used their services, fewer people would be in emergency rooms and/or jails.

Autumn Butsch has been a registered nurse at the Central East Correctional Centre for more than 10 years. She says most of the 1,200 inmates there have a mental health or addiction issue.

"In the past we've seen the closure of psychiatric beds across the province and this has created an influx of mental health inmates."

But the Lindsay, Ont. super jail doesn't have a special needs unit to handle and treat the inmates, so it does what most other jails do with special needs offenders.

According to the Ministry of Community Safety and Correctional Services, there are 268 special needs beds and another 184 multi-purpose beds that can be converted to special need beds - a total of 452 beds - for 9,772 inmates.

Those beds are located at:

But staff at EMDCsay they aren't trained to handle psychological and behavioral issues.

"I was under the impression when I got there over a year ago that I was going to get significant training to be in that unit, because it's supposed to be a specialized unit, but all we had was eight hours where we got a tour of the psychiatric facilities in St. Thomas. We didn't get any training really."

And he says the troubled jail's mental health nurse, which they were only recently provided, quit several weeks ago and so far no replacement has been found.

Tammy Carson, OPSEU's provincial health and safety representative for corrections, says many inmates shouldn't even be in jail.

"A lot of mentally ill inmates find themselves homeless, they get picked up and find themselves in our jails and we don't have the training or resources to deal with them."

Connex Ontario's Brad Davey says he has a partial solution, but first the organization has to get onto the radar of emergency services.

The group saves the Ontario government millions every month while helping thousands of people struggling with mental health and addiction issues.

How? They have the largest database of mental health services in the province, meaning they can get the right person in the right treatment as quickly as possible, diverting thousands from emergency rooms and even jails.

Currently, the Toronto Police Service is the only one that uses the Connex network to their advantage.

Davey explains, "A police officer sees somebody on the street, maybe talking to themselves, they really need to be somewhere, they don't have a home, rather than bringing them to cells, police call us."

And then using their database, staff track down a safe bed for the resident and police bring them there, instead of to a hospital or a cell.

If something like that happens in the Erie St. Clair LHIN's area, they can go even further. It's the only Local Health Integration Network that's fully using Connex's network.

Callers from that region are directly booked into therapists, counselling and treatments, which means they are more likely to seek help before the problem becomes more difficult and more expensive.

And by using Connex the Erie St. Clair LHIN is using its resources much better.

Connex tracks the acute psychiatric beds at Windsor and Chatham hospitals so fewer patients wait in halls and for the first time, children's psychiatric beds at Maryvale Adolescent and Fmily Services are tracked and doctors can see when a vacancy arises, which means they're actually getting used - climbing from a 60 per cent occupancy to 95 per cent.

Davey says, "They were spending the money whether they were at 60 per cent or 95 per cent. So by driving usage up, they feel it's a much more effective use of resources." 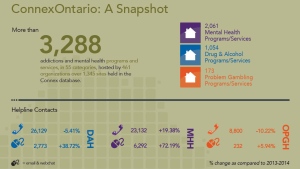