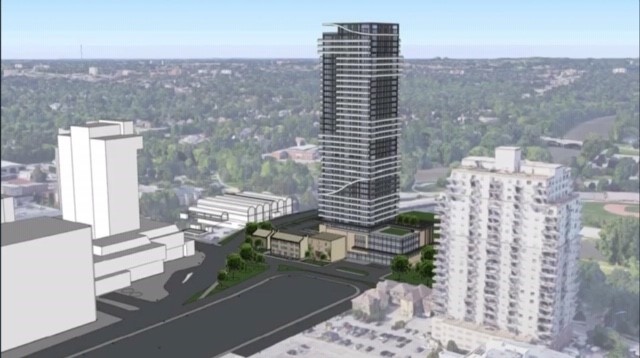 LONDON, ONT. -- London’s most Historic streetscape will be getting a modern addition.

“The key to revitalizing our downtown is getting the residential critical mass that creates a true neighbourhood,” argued Councillor Shawn Lewis.

The new building would also be next door to Eldon House, the city’s oldest home, and overlook both the Forks of the Thames and Harris Park.

“There are ways and means to bring in the new where the old already exists,” assured Councillor Maureen Cassidy.

Councillor Jesse Helmer added, “Overall, the proposal is a good one, and retaining the heritage buildings that are along Ridout.”

In their report, city staff recommend approval of the rezoning because it conforms to the policies contained in The London Plan.

City staff also recommend bonus zoning which permit the additional height and density on the property in exchange for several concessions by Farhi Developments including:

“I don’t have a lot of faith that this building will ever be built.” Said Councillor Stephen Turner. “I say to the applicant— prove me wrong.”

“We shouldn’t be saying that about one developer or another, because they all make their own decisions,” countered Councillor Phil Squire, Chair of the Planning and Environment Committee. “That being said, this is a huge opportunity for Mr Farhi to develop what will be a landmark property in London.”

The Upper Thames River Conservation Authority (UTRCA) has set a number of floodplain-related conditions that must be met before construction can proceed.