'Snowmicron': the city tackles the first big snowfall in the time of COVID-19 Omicron variant

It was shaping up to be the biggest storm of the season and the first big test for road maintenance teams under COVID-19 Omicron conditions.

While they didn’t get the brunt of the storm that pushed into Ontario on Monday, City of London officials say the response went well for the first significant snowfall of the year.

There was a steady stream of trucks moving through the Exeter Road Operations Centre.

John Parsons, the city’s division manager of road operations, says it was “all hands on deck.”

Parsons says keeping equipment available has required early planning as they try to ensure supply chain issues don’t become a problem, "If some equipment goes down it could be hard to get some parts, but we've ordered extra parts so we are ready for those types of situations." 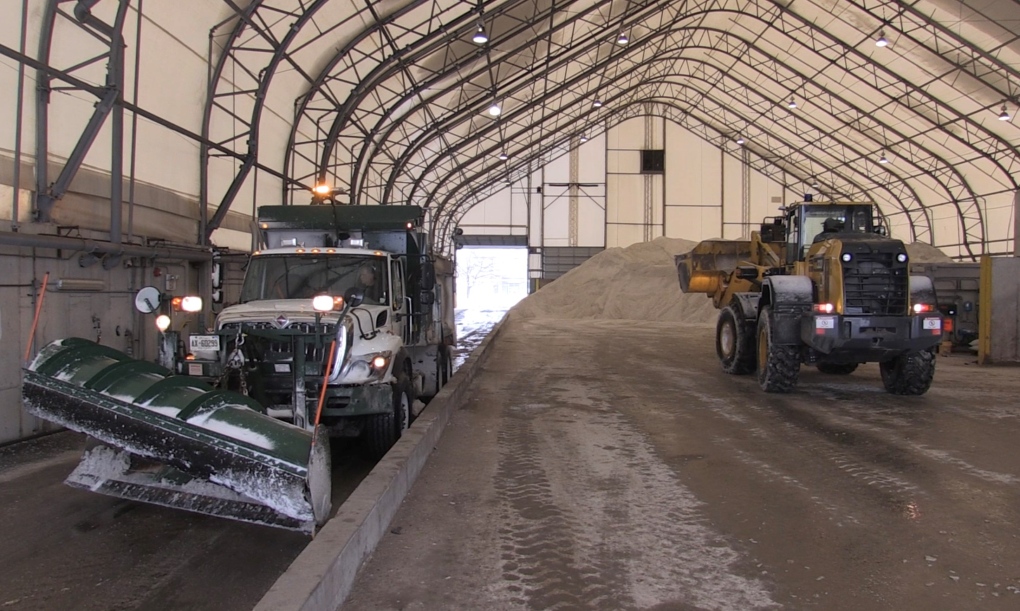 City of London Exeter Road Operations Centre, Jan. 17, 2022. (Gerry Dewan / CTV News)There were no serious accidents on area roadways during the overnight snowfall Sunday into Monday, including the 401 and 402 highways but police believe drivers could do better, with a few ending up in the ditch.

West Region OPP Sergeant Ed Sanchuk says it starts with making the decision not to travel or allowing more time for the journey.

"We're just asking people to make sure they slow down, drive according to the road and weather conditions, put their safety as a priority," said Sanchuck.

Looking at other forms of travel, there were a number of flights out of London International Airport that were cancelled Monday morning, but that had more to do with the storms impact on Toronto.

As for more localized snow clearing operations, Clari Thornicroft had to shift to the shovel to clear her driveway after the snow blower ran out of gas, but she did so grudgingly, "I don't like it. I like summer but we live in Canada so that's how it is," she said.

Parsons says, while staffing wasn't an issue Monday morning, the city will be monitoring the impacts of Omicron.

He says the pandemic, along with provincial government limits on shift lengths, may impact future snow clearing efforts.

Beto O'Rourke confronts Gov. Abbott on shooting: 'This is on you'

A news conference about the shooting at a Texas elementary school broke into shouting Wednesday as Democratic gubernatorial candidate Beto O'Rourke blamed Republican Gov. Greg Abbott for inaction ahead of the latest in a long string of mass shootings in the state.

Prime Minister Justin Trudeau cancelled plans to appear in person at a Liberal fundraiser in British Columbia Tuesday after RCMP warned an aggressive protest outside the event could escalate if he arrived, said a source close to the decision. The source spoke to The Canadian Press on condition of anonymity because they were not authorized to discuss the situation publicly.

Governor: Texas gunman said he was going to shoot up school

The gunman who massacred 19 children and two teachers at an elementary school in Texas had warned in online messages minutes before the attack that he had shot his grandmother and was going to shoot up a school, the governor said Wednesday.

Who controls the price of crude oil?

Do oil companies control the price of crude? CTVNews.ca asked experts to explain.

The six candidates on the ballot to be the next leader of the Conservative Party of Canada are debating face-to-face in French, in Laval, Que.

'How to Murder Your Husband' author found guilty of murder

A jury in Portland has convicted a self-published romance novelist - who once wrote an essay titled 'How to Murder Your Husband' - of fatally shooting her husband four years ago.

The Public Health Agency of Canada says it has now confirmed a total of 16 cases of monkeypox in the country, all in Quebec.