The flyby, announced on Twitter, happened around 11:15 a.m. Tuesday.

The Snowbirds have recently been spending the week in Windsor, Ont. to attend airshows in the United States.

On June 6, a Muslim family was out for a walk along Hyde Park Road when they were run down by a driver in a pickup truck.

The alleged attack left four members of the family dead and a young boy injured. The boy, nine-year-old Fayez Afzaal, has since been released from hospital.

The funerals for 46-year-old Salman Afzaal, his 44-year-old wife Madiha, their 15-year-old daughter Yumnah and her 74-year-old grandmother, Talat Afzaal were held on the weekend.

"Again another show of support and solidarity for our community, the symbolism behind it...a beautiful gesture from the Canadian Forces to show their respect and to honour the Afzaal family."

The alleged attack has been called a terrorist act by politicians, including Prime Minister Justin Trudeau, and many in the community.

On Monday the accused, Nathaniel Veltman, 20, had his charges upgraded to include terrorism.

He is facing four counts of first-degree murder and one count of attempted murder. None of the charges has been proven in court. 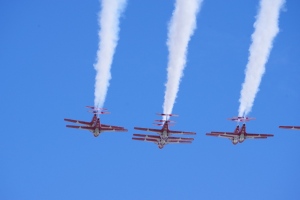