Many in London and surrounding areas are waking up to a significant amount of snow to shovel Friday.

Snow is piled up in some areas Thursday and a snow squall warning remains in effect for London, Western Middlesex, and Huron Perth. A watch is in place for Sarnia-Lambton.

A blast of cold air moving across Lake Huron is generated the snow squalls that are expected to finally taper off by noon.

Off-lake flurries started Wednesday in western Middlesex, Lambton, Huron, Perth and southern Bruce counties. Areas north and west of London had received between five and 15 cm of snow by Thursday afternoon, and more by Friday morning.

Whiteouts and blowing snow will continued Thursday night, as squalls will lingered through the evening.

Snowfall amounts vary significantly in the region, depending on where the snow band locks in.

Accumulations in Huron County will be the highest, with some areas expecting to see another 15-20 cm.

Squalls will continue in parts of Midwestern Ontario and the City of London overnight into Friday morning. London could see 10 cm by Friday.

Blowing snow will be an issue with northwest winds at 30 km/h gusting to 50 km/h.

Friday morning could bring another round of accumulating snow as winds continue from the northwest.

The coldest air of the winter season has also arrived, with the wind chill Thursday night expected to be feel close to -20, so bundle up. 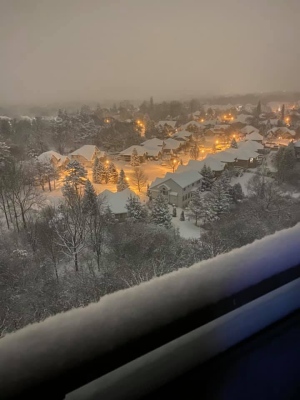 In Pictures: London Covered in Snow