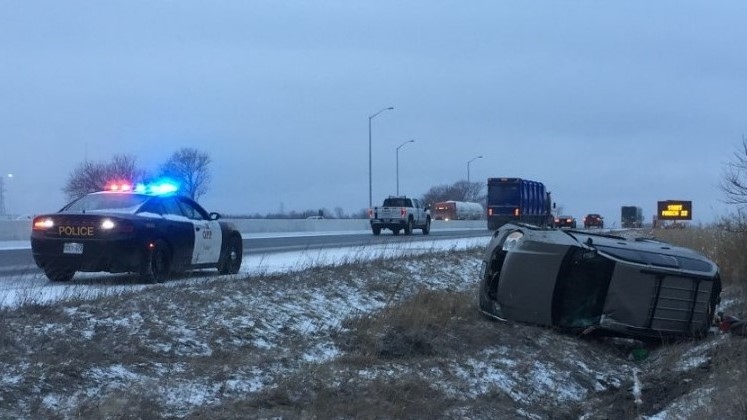 LONDON, ONT. -- A layer of ice pellets and freezing drizzle made for slippery conditions on regional roads Tuesday morning.

Emergency crews responded to multiple collisions along Highway 401 as a result of vehicles in ditches.

Just before 7 a.m. crews were called to the 401 westbound near Highbury Avenue for a report of a collision between a vehicle and a transport.

Shortly after 6 a.m. crews were called to the 401 off ramp at Wonderland Road for a report of a vehicle in a ditch.

Police along with EMS and London Fire Crews attended the scene. No injuries were reported.

Shortly after crews were called to another single vehicle into a ditch on the 401 eastbound just east of Wonderland Road.

There have also been reports of a collisions on Highway 401 near Union Road and Dorchester Road.

No serious injuries have been reported in any of the collisions.

#OPP have responded to several collisions in and around London this morning. Please turn on your full lights, slow down and drive according to conditions. #SeeSnowGoSlow ^nk pic.twitter.com/9u4p7ENXBe

Motorists should expect delays in any area that emergency crews are present.

Within the city a two vehicle collision was reported at the intersection of Hyde Park Road and Fanshawe Park Road.

No serious injuries have been reported in the collision as well.

in London periods of snow or ice pellets are expected to end Tuesday morning as temperatures warm up. A chance of freezing drizzle remains throughout the morning.

There is also a risk for freezing drizzle late Monday evening and overnight.