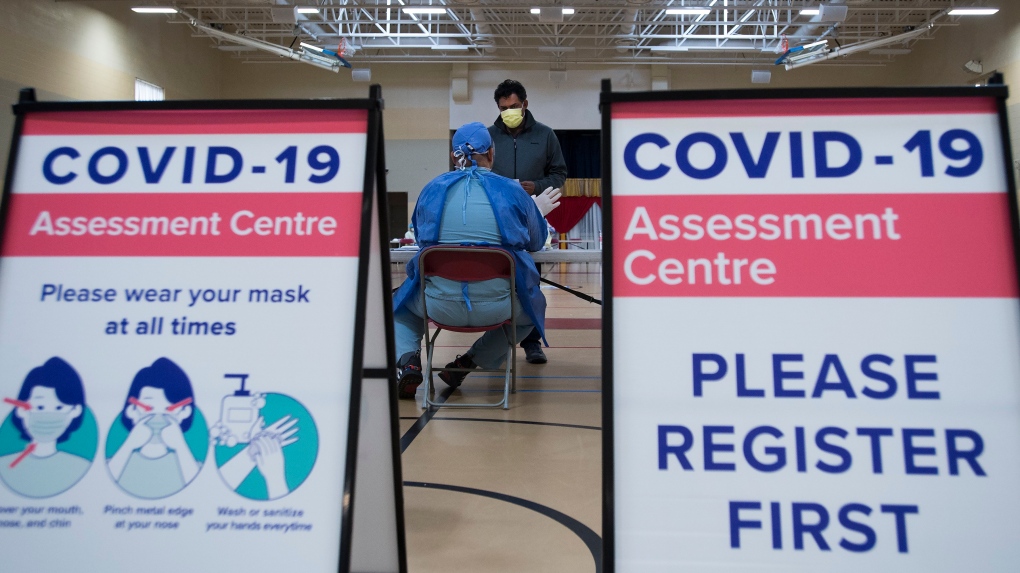 Muhammad Junayed, centre back, gets instructions for being tested for COVID-19 from a health care worker at a pop-up testing centre at the Islamic Institute of Toronto during the COVID-19 pandemic in Scarborough, Ont., on Friday, May 29, 2020. THE CANADIAN PRESS/Nathan Denette

MIDDLESEX CENTRE, ONT. -- Six new COVID-19 cases are being reported by the Middlesex-London Health Unit (MLHU) Monday, including one linked to the Black Lives Matter rally.

However, MLHU Medical Officer of Health Dr. Chris Mackie says this is a “very low-risk situation,” for several reasons.

He says the person was not symptomatic and wore a mask when she attended the rally at Victoria Park on June 6.

She was tested out of “an abundance of caution on [her] part” three days after the rally and has shown no signs or symptoms of COVID-19 since attending.

The health unit added in a statement, “There is no indication the person was exposed to the virus at the protest, nor that they were infectious at the time they were at Victoria Park. While there is no increased need for anyone who attended the event to seek testing for COVID-19, the Health Unit continues to recommend that those who were in attendance monitor themselves for symptoms until Saturday, June 20th.”

Officials are recommending people continue to stay six feet apart, wash hands frequently, cough or sneeze into your elbow and use face coverings in the community.

The new cases bring the total to 585, with 547 of those in the City of London and 170 associated with seniors’ facilities. Outbreaks continue at two seniors’ homes in London.

To date, 452 of those who became ill have recovered. There were no new deaths reported on Monday, with that total holding at 57, of which 36 are linked to long-term care or retirement homes.

One new case was reported in Sarnia-Lambton as of Sunday night, bringing the totals there to 276 cases with 235 resolved and 25 deaths.

No new cases have been reported at Vision Nursing Home in Sarnia, the only active outbreak in the region, where there have been 54 cases and 10 deaths.

Across Ontario, there were 181 new cases reported Monday, the lowest since late March.

No increase in other counties

There were no new cases reported in the last 24 hours by Southwestern Public Health.

The totals for Elgin and Oxford counties sit at 80 cases, 70 resolved and four deaths. No new cases have been reported there since Friday.

Huron-Perth Public Health is reporting no change in its COVID-19 caseload as of Sunday, with 56 cases, 48 resolved and five deaths.

And Grey Bruce Public Health is also reporting no change, with a total of 101 cases, including 91 recovered and no deaths as of Sunday.

More than a quarter of Canadians at higher risk of severe COVID-19 illness: study

A CERB extension is in the works for those in need: PM

Quebec to allow indoor gatherings of up to 50 people

Family estrangement during the pandemic another layer of isolation

Living with an ex: When pandemic breakups don't mean separating

These retailers are closing Canadian locations in 2020

Is the great shift to working from home here to stay?