Six injured after car drives into Costco in south London

Six people were injured, three critically, when a car backed into the entrance of the Costco location on Wellington Road in south London on Friday.

Officials say a pregnant woman and two children were among the six taken to hospital. The two children and their mother are reportedly in critical condition.

Three others, including the driver, were being treated for minor injuries. Still more were treated for their injuries at the scene.

Witnesses say they heard a loud revving sound before the red sedan backed full-speed into the store's front doors bringing piles of glass crashing down.

Araam Wendy, a Costco employee who was doing some shopping on a day off, says, "You just hear a large bang and you hear loud cries and screams and you just hear the glass shatter, everywhere you see debris."

He says many people came to the aid of those injured, and he tried to keep people away from the shattered glass, but "No one knows why it happened or how it happened."

Many witnesses who spoke to CTV News at the scene couldn't contain their emotion after what had occurred. Some called 911 and attended to the injured while others tried to keep the children involved calm by singing to them.

Betsi Simmons explains "It was tough...You could hear people screaming, there were bodies flying, you don't imagine that's what's going to happen. I think we're all still in shock."

London police, OPP, London fire crews and EMS all responded to the collision around the noon hour and an investigation continues into the cause of the crash.

London police Sgt. Jon Orchard says "We're treating it right now as a motor vehicle collision investigation and not as a criminal investigation at this point."

There are reports that between 600 and 700 people were in the store at the time of the crash. The store remains closed and it's unclear when it will reopen.

Costco says it will be providing counselling for any employees who were involved or ran to the scene to help the injured.

Simmons adds that seeing everyone come together to help in a time of tragedy was "amazing." 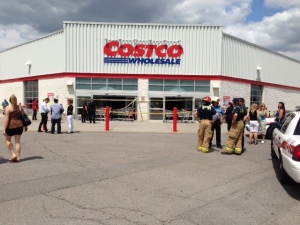