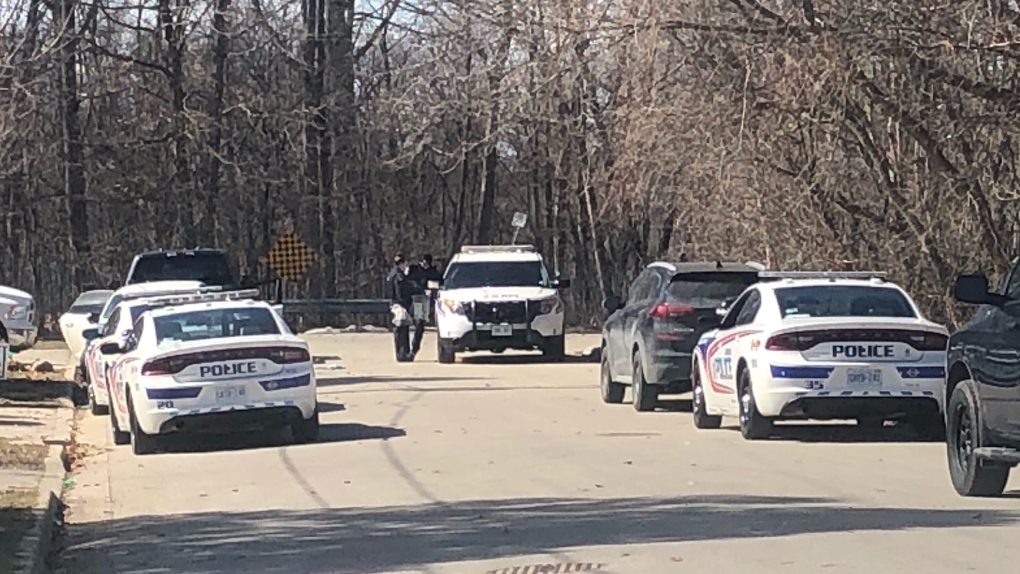 Police work at the scene where an alleged impaired driver was arrested on Tecumseh Avenue West in London, Ont. on Sunday, March 14, 2021. (Jordyn Read / CTV News)

London police were responding to multiple 911 calls shortly before noon on Sunday about a suspected impaired driver.

A white, four-door Volkswagen was reportedly driving erratically in the south end.

The driver was then seen asleep at the wheel, and when a citizen knocked on the window he reportedly drove away through a red light.

The vehicle was then spotted almost hitting a man on a bicycle in the area of Wharncliffe Road and Baseline Road West.

Officers eventually located the vehicle stopped facing the wrong direction along the side of Tecumseh Avenue, with the driver again asleep at the wheel with the vehicle running.

The 22-year-old London man also allegedly provided a false name to police, but when officers ascertained his real name they say he was found to be a prohibited driver.

After telling police he was injured, the man was taken to hospital before being released.

Three officers sustained minor injuries during the arrest, and about $150 in damage was done to London police cruisers.

A search of the vehicle following the driver's arrest turned up a loaded .40 calibre handgun, oxytocin and liquid codeine, according to police.

The driver is now facing a slew of charges including:

The suspect was scheduled to appear in court Monday.

The SIU is now investigating.