Several collisions across the city this morning 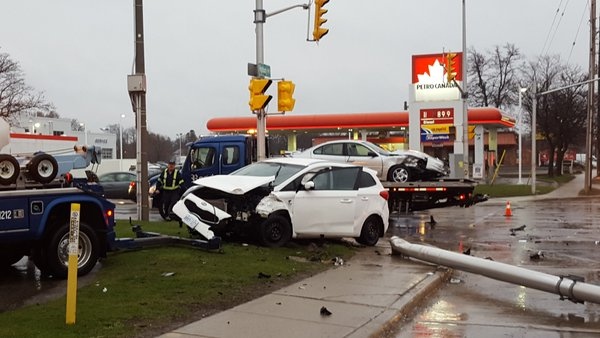 A multi-vehicle collision caused major delays at Highbury Ave. and Dundas St. after a traffic light was knocked down on Thursday, March 31, 2016. (Justin Zadorsky / CTV London)

Londoners woke up to a wet and messy commute and many were likely impacted by several collisions throughout the city this morning.

A three-vehicle collision caused major delays at Highbury Avenue and Dundas Street after a traffic light was taken down.

The collision occurred around 7 a.m. The downed traffic light was blocking the northbound lanes of Highbury Ave. and at least one vehicle jumped the curb.

Police say that one person was taken to hospital with minor injuries.

Meanwhile a two vehicle collision at Commissioners and Wellington around 7 a.m. caused some delays as well.

Finally at 6:45 a.m. a pedestrian was struck by a vehicle at the Western Road entrance to University Hospital. The pedestrian suffered minor injuries.