Highway 4 in Wingham has re-opened after a two-vehicle crash on Sunday evening that left both drivers with serious injuries.

Wingham police were called to the scene on Josephine Street shortly after 7 p.m. on Sunday.

Witnesses tell CTV's Scott Miller that a red van was seen "speeding" into town before colliding with a black pickup truck and then flipping several times before landing about 60 metres from the initial crash.

The drivers of both vehicles had to be extricated and suffered serious, life-threatening injuries. A child passenger in the truck was was also injured but is expected to be fine.

The driver of the minivan is reportely now in a London hospital with serious injuries.

The driver of the truck, a pregnant woman, was transported to a Hamilton hospital with very serious injuries.

Highway 4 was closed through Sunday night and into Monday morning to clear the debris and for the investigation.

Police say there is no connection between the collision and the shooting in Clinton.

It's unclear if any charges are pending. 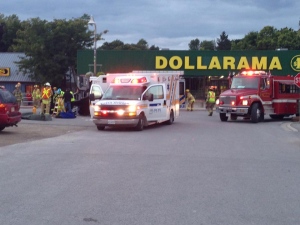