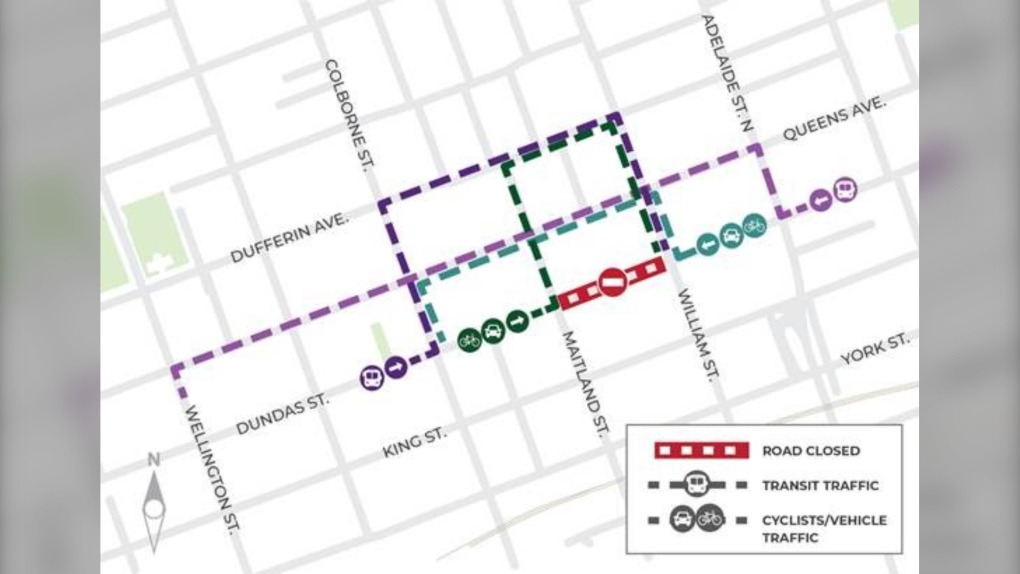 A map depicts a section of Dundas Street that will be closed from Dec. 5 to Dec.16, and alternative routes for drivers, transit users and cyclists. (Source: City of London)

A heads up for drivers as the new workweek begins, but a section of Dundas Street will be closed beginning tomorrow as crews install new water and sanitation infrastructure underneath the street.

According to a press release from the City of London, Dundas Street between Maitland and William streets will be closed to all traffic starting on Monday to allow crews to install new sanitary and water services beneath the road.

For pedestrian traffic, navigational signage will be in place to help guide pedestrians around the construction area.

PM Trudeau presents premiers $196B health-care funding deal, including $46B in new funding

Three men who disappeared after planning to rap at a Detroit party were killed by multiple gunshots, police said Tuesday, five days after their bodies were found in a vacant, rat-infested building.

A report from British Columbia's coroner says a prominent anti-vaccine and COVID critic died in 2021 of a drug overdose, although he also tested positive for the illness post-mortem.

A former actor in the movie 'Dances With Wolves' who is facing eight sex-related charges in Nevada is also facing a charge in British Columbia.