The province has renamed the Black Creek Bridge in memory of fallen OPP Const. Sam Ankenmann.

Ankenmann died on June 29, 1968, when he lost control of his cruiser in foggy conditions on Highway 7/8 near Stratford.

OPP Commissioner Chris Lewis said in a statement "This bridge dedication serves as a memorial to the sacrifice that this OPP officer made and also serves as a reminder of the risks that all police officers face on a daily basis as they serve communities across the province."

Memorial signs displaying the officer’s name and police service crest have been posted at each end of the bridge in his honour.

Glen Murray, minister of transportation, added “Now and into the future, each time a driver passes by, they will be reminded of the sacrifice this brave police officer made to keep his community safe.”

Ontario has permitted bridges and other highway structures to be named in memory of fallen police officers starting in 2002.

Since then, 52 provincial highway structures have been named in honour of fallen police officers. 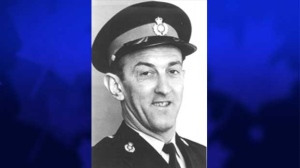