Seaforth Foodland will be rebuilt: owner

The owner of Seaforth’s only grocery store, which burned down over the weekend, says he plans to rebuild on the same site but it may take until the end of the year.

Fire crews were called to 95 Main Street South around 3 a.m. Saturday morning. They were able to contain the fire to the Foodland store, but couldn’t save the building. No one was injured.

The fire is being called suspicious, and an investigation into the cause of the blaze continues. It is believed to have been intentionally set at the store’s rear loading dock.

An initial estimate has pegged the damage at around $2 million.

On Monday, store owner Steve Delchiaro, who had just returned from vacation, was on scene as were Huron East’s mayor and councillors.

The municipality and the owner are working towards setting up a temporary location at the Seaforth Arena until the store can be rebuilt.

However, it may take a week or more to setup freezers, fridges and shelving for the makeshift store.

Huron East Mayor Bernie MacLellan says “We just want to get something back up and running as quickly as possible.”

In the meantime, there is shock, disappointment and anger that a fire could have been intentionally set. But the community is also pulling together.

Bob Fisher, a councillor and local business man, says “At church yesterday people were talking about how they can help their neighbours, take them to get groceries or go get groceries for them.”

Residents speaking with CTV News say they will help seniors and those without transportation get to neighbouring communities like Clinton or Mitchell for groceries. 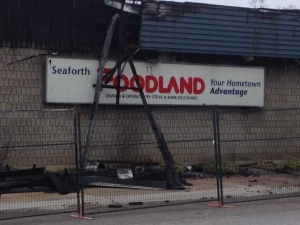 In Pictures: Fire at Seaforth Foodland