School buses, safety and a tree collide in London neighbourhood

LONDON, ONT. -- Neighbours surrounding an overcrowded school in the Thames Valley District School Board (TVDSB) are upset with a plan to create a school bus access road next to their backyards.

The Oxford Park Community Association (OPCA) says the plan threatens neighbours, traffic and even what could be one of the tallest vintage trees of its type in Ontario.

OPCA members say they were not consulted about the road plan in advance. It would run from Eagle Heights Public School on Oxford Street through the schoolyard to Upper Avenue.

Member Sandra Miller says her group only discovered details when they noted someone measuring the site.

“They didn’t reach out to us, they didn’t notify any of the neighbours. We literally found out by accident.”

But a lack of consultation is just one source of concern for the neighbours.

Another, Miller expresses, is how the roadway may threaten a large bitternut hickory tree.

“We’re not sure how old it is. It’s over 35 metres high. It’s a 3 1/2 metre circumference. We believe it to be the largest one in the province.” 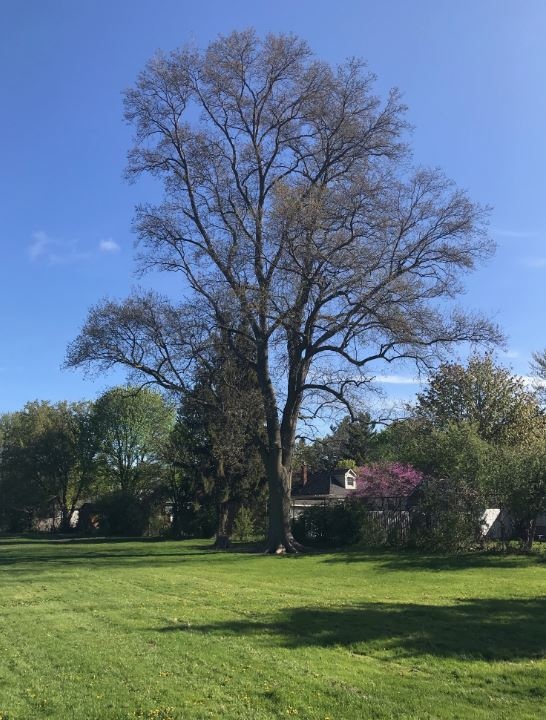 A tree, neighbours say may be the tallest of its kind, is seen on the school grounds of Eagle Heights Public School on May 10, 2021. (Sean Irvine / CTV News)

Graham Holmes is an admirer of the tree both as a resident of Oxford Park and as a retired Eagle Heights teacher.

He’s concerned the roadway is merely a stop-gap measure for a schoolyard filled with portables.

“There are just too many kids in the building at over 1,000. It would just seem that the smartest solution is to build a new school somewhere else in the city.”

“Ultimately it's for the safety of students, Oxford Street becomes quite a buzz at the beginning and end of the day," says Ken Overeem, school principal.

The TVDSB is proposing the road is to deal with congestion and safety once the pandemic subsides. In a typical school year, buses enter and exit off busy Oxford Street.

The school board tells CTV News it is working within the City of London and, pending approvals, hopes to complete the project in September.

Meanwhile, residents have taken to social media and have just started an online petition, which is gaining traction from many outside the area, who are primarily upset about the tree Steve Grimes, whose homes back onto Eagle Heights Public School is seen in his backyard on May 10, 2021. (Sean Irvine/CTV London).

Steve Grimes, whose property backs on the school playground next to the proposed road - and tree - just hopes the board will work with neighbours.

“At least let us know what the plans are, to fill us in on it, because we are directly affected by what’s happening.”

The TVDSB says it has recently answered many questions directly to the neighbourhood association.

And in a turn of events, the school board made an unexpected announcement after speaking to CTV News Monday afternoon.

The board says at this point its roadway plan will work around the tree, leaving it undisturbed. "We can look at (reducing) the laneway, or other engineering aspects of it, so we can save that tree," says spokesperson Carlos Henriquez.