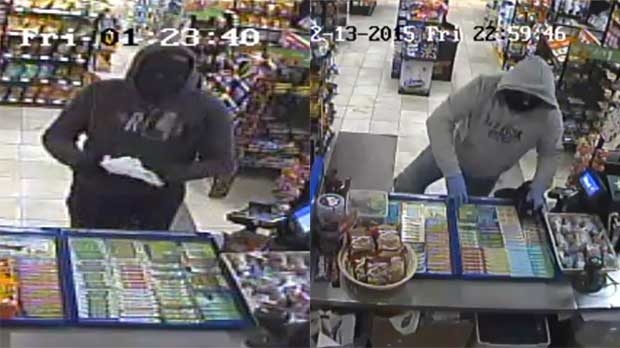 Surveillance images released by Sarnia police show two robberies at a Mac's Milk at 299 Confederation St. believed to involve the same suspect. The image on the left is from April 24, 2015 and the image on the right is from Feb. 13, 2015.

Sarnia police are seeking a suspect following a robbery early Friday morning at a variety store.

That store was also robbed in February and police believe it is the same man.

The suspect in Friday's incident was wearing black pants, white running shoes and a greenish-gray hoodie with red and beige lettering, including the letters R and L on the front Friday.

He was also wearing a black mask.

In the February 13 robbery, the suspect was described to be over 6 feet tall, wearing a light grey sweater, a black mask, light blue jeans and black boots.

The suspect was also wearing light blue surgical gloves.  A black bag was used to collect the money.

Police have released surveillance video from the store showing the suspect.