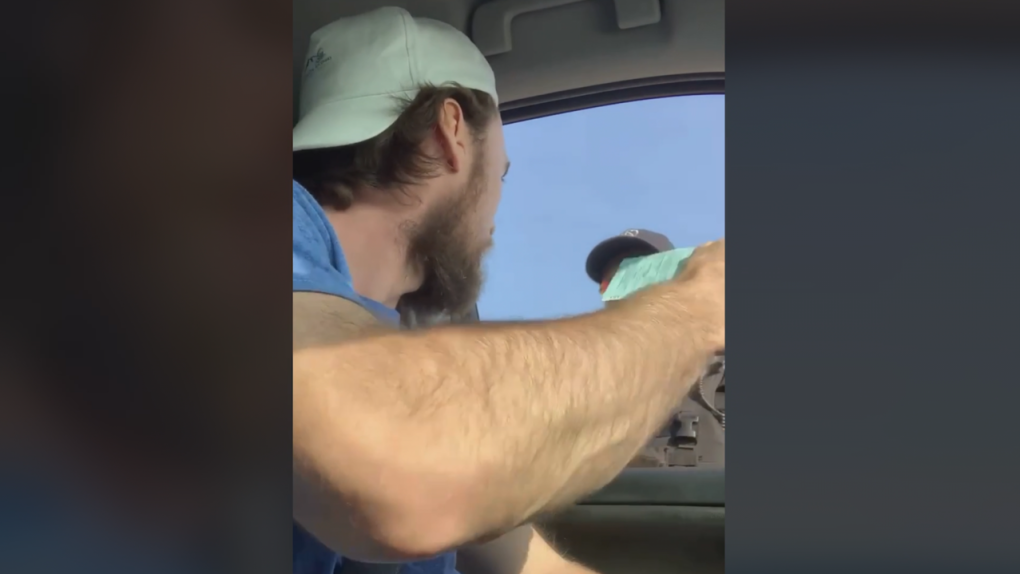 Hunter Johnson takes a ticket from a Sarnia Police Service officer in a video posted to Facebook. (Source: Hunter Johnson/Facebook)

LONDON, ONT. -- A Sarnia-area man who filmed himself receiving a ticket for a violation of lockdown protocols is speaking out.

Hunter Johnson says he intends to fight the $750 ($880 with the victim impact surcharge) ticket in court.

Johnson received the fine in the vicinity of Sharky’s Gym on London Line in Sarnia, where he had just completed a workout.

In the video, an officer is seen reminding Johnson he had been warned on Tuesday. Moments later, he handed him a ticket.

Sarnia police Const. Giovanni Sottosanti tells CTV News two fines were laid under the Reopening Ontario Act by officers in the area of the gym Wednesday.

The operators of Sharky’s were fined under the Reopening Ontario Act on Monday.

Johnson says he appreciates their defiance as he considers workouts vital to his mental health.

The former Greater Ontario Junior Hockey League (GOJHL) star says he struggled following his playing days, but a return to the gym a few years ago put him back on track.

He says COVID-19-related closures have not helped, so he felt it was right to attend a gym ordered to be closed.

“You can’t tell someone something is essential, when truly that might be the most essential thing to their life, but you don’t know, 'cause you don’t know their past.”

Johnson says he can’t understand how some big-box stores remain open while gyms are closed.

He argues physical distancing guidelines are better met in a wide-open gym space than in a store.

He also contends the arresting officer was hypocritical, as he was not wearing a mask.

“They approach me within six feet and I think I have a better chance of getting COVID by doing that, than by me going into a gym here.”

In contrast, Sarnia Mayor Mike Bradley said Tuesday he believes everyone in the community needs to think about public safety.

"The greater issue is to look beyond the grey zone period," says Bradley. "How does businesses opening and exposing more people including their staff and patrons to the possibility of COVID help us get out of this grey zone?"

He maintains the only way to get to a 'better place' is to follow the restrictions in place currently.