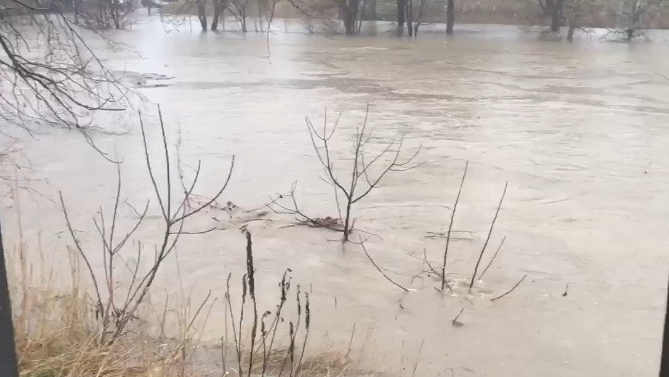 LONDON, ONT. -- Conservation authorities throughout the region are warning of possible flooding and slippery conditions around waterways.

“The public is encouraged to exercise extreme caution around all local ditches, streams and rivers, and to stay off of frozen waterbodies and flood control reservoirs,” UTRCA says.

The Essex Region Conservation Authority has a flood watch in effect for the Lake Erie shoreline due to elevated lake levels and predicted sustained winds.

It says potentially affected areas include the shoreline in Amherstburg, Essex, Kingsville, Leamington west of Point Pelee National Park (PigeonBay), and the west and south shorelines of Pelee Island.

The Ausable Bayfield Conservation Authority has issued a water safety statement that will remain in effect until Friday.

It says due to saturated ground conditions, a quick runoff is likely.

“Residents are reminded to use caution near all watercourses. Slippery and unstable streambanks, and extremely cold and fast-flowing water will combine to create hazardous conditions. Ice remaining on ponds and reservoirs will be very unsafe,” the authority says.

Meanwhile, Maitland Conservation says high water levels are expected in certain areas into the weekend and flooding is expected to be limited to traditional low-lying areas.

The headwaters areas  of Harriston and east of Listowel were expected to peak Monday evening with the larger rivers continuing to rise Tuesday.

“Municipal staff have been asked to monitor local problem areas and be prepared for the closures of low lying roads,” Maitland Conservation says.