Ruth Burger has been found guilty of dangerous driving in a deadly crash at the south London Costco, which killed two and injured two others.

The long-awaited verdict, stemming from the events surrounding a collision on July 25, 2014, was delivered Friday morning at the London courthouse.

Six-year-old Addison Hall died in the crash and her then-pregnant mother, 26-year-old Danah McKinnon-Bozek and her sister, three-year-old Miah Bozek were injured.

Newborn Rhiannon Bozek was delivered by Caesarean section immediately after the collision, but died a week later on Aug. 1, 2014.

Justice Jonathon George told the court on Friday that he must conclude that Burger's driving was dangerous. He says the vehicle was effectively a missile and she did nothing to avert the risk.

The trial was expected to last five days, but quickly ended on June 2 after Burger took the stand.

An emotional Burger had told the court previously that she tried to press the brake to slow down and that's when her foot got caught.

"I remember saying, 'Oh, no. Oh, no.' And then I heard the crash of the glass," a sobbing Burger said.

Both the Crown and defence have agreed that Burger was not suffering from any health issues, physical or mental, and that her car did not have a mechanical failure.

Speaking after the verdict, Addison Hall's father, Eric, said harbours no ill will toward Burger, that he "can't imagine what she is feeling" and has forgiven her.

He added that he hopes his daughter's memory will teach others about forgiveness and safe driving.

Burger's lawyer Ron Ellis told reporters outside the courthouse that he is "disappointed with the outcome" of the trial.

"It's a sad day and my comments are, that it would have been a sad day if Ruth was acquitted of the charges. Regardless of the decision it's a sad day."

Ellis has not said if there will be an appeal of the judge’s decision.

Sentencing is scheduled for Oct. 20.

Photos From the Archives 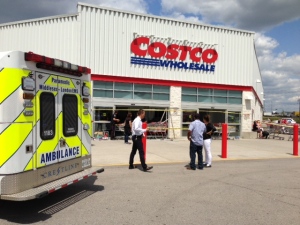