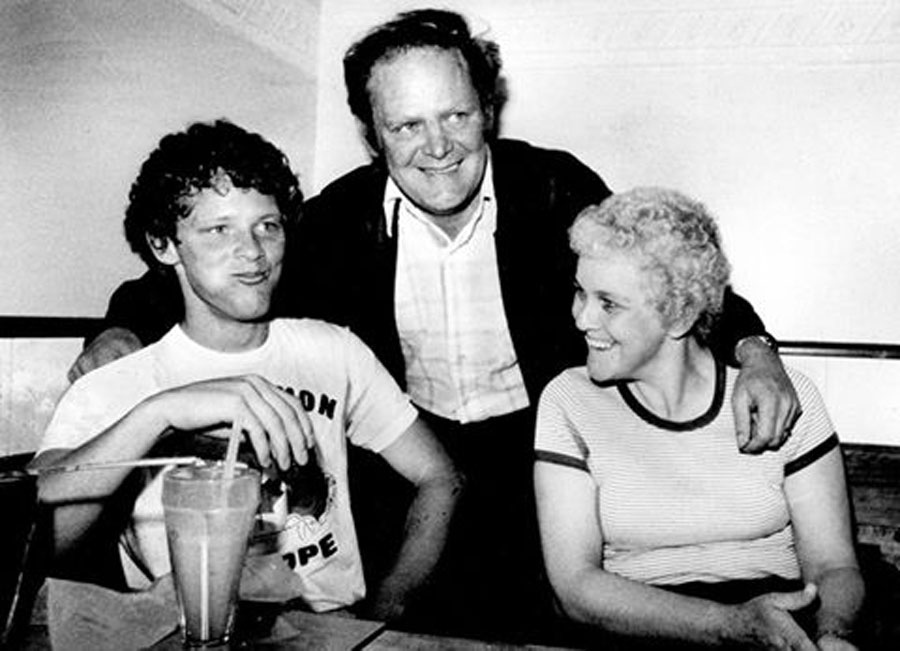 Rolland Fox, centre, the father of iconic marathon runner Terry Fox, left, has died at the age of 80. (Facebook / The Terry Fox Foundation)

VANCOUVER - Rolland Fox, the father of iconic Marathon of Hope runner Terry Fox, has died at the age of 80.

A statement posted on the Terry Fox Foundation website said the family patriarch known to friends and family as Rolly died on Tuesday afternoon, having been diagnosed in January with lung cancer.

"Our Dad and Grandpa is no longer telling jokes," said the statement, adding that Fox died "while listening to a little Hank Williams."

The Fox family had said in January that he was committed to approaching the challenge with optimism and a never-give-up attitude - attributes that he "likely passed on to his son Terry."

"He fulfilled his promise to Terry, facing cancer with courage, grace and plenty of humour," the statement read.

"He thanked everyone, every time, as they left the room after caring for him, and each and every family member and friend after a visit."

Rolly Fox began smoking at age 19 and quit on a dare from his brother in 1986, the family said in January, noting Fox had completed a 16-kilometre run the following year.

The patriarch was a "behind-the-scenes believer" of his son's mission for 36 years and after the 2011 death of his wife and Terry Fox's mother, Betty Fox, he became more active, visiting Terry Fox Runs across Canada.

Terry Fox was diagnosed with cancer and his right leg was amputated in 1977. He became a national icon after he ran more than 5,000 kilometres over 143 days in 1980 to raise money for cancer research. He died in June 1981 at the age of 22.

"We have witnessed once again the pain cancer causes but we know, oh how we know, that we are not alone," said the family statement.

"We have seen first hand the opportunities to extend life because of our nation's collective belief and investment in cancer research, yet have been forced to accept that they were not available to Dad-Grandpa."

In a statement issued late Tuesday, B.C. Premier Christy Clark said "B.C., Canada, and the world have lost a dedicated, resolute pillar in the fight against cancer in Rolly Fox."

"He made the hero's dream to beat cancer stronger and closer - not just for him, but the millions of people inspired by him and the Fox family, and the thousands of families forever changed by life-saving cancer research."