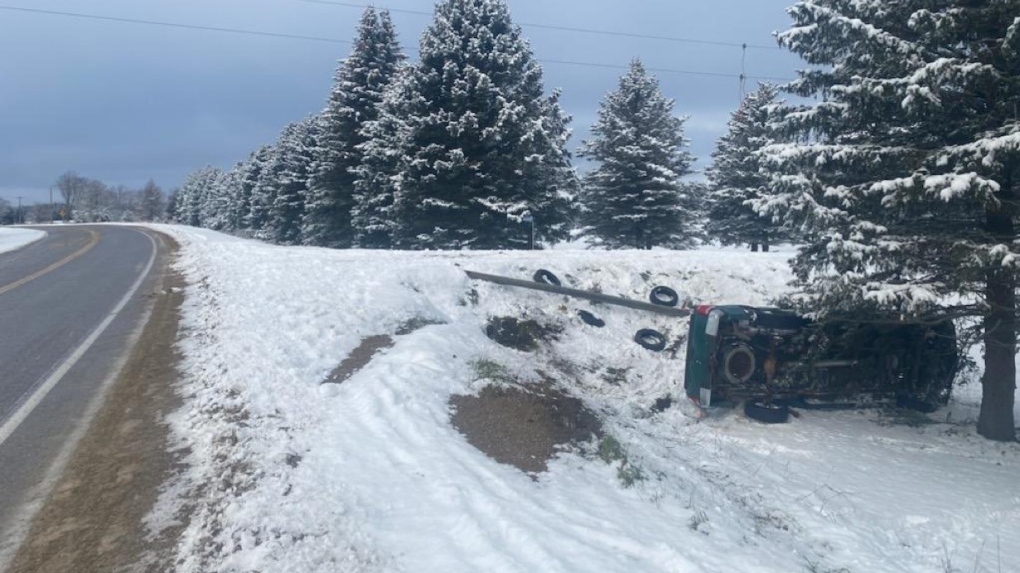 Two people suffered minor injuries after the vehicle they were travelling in rolled over, sheering off a hydro pole near Wingham, Ont. Tuesday morning.

The crash happened shortly after 9 a.m. on Highway 86 between Wingham and Bluevale.

It took hydro crews over five hours to replace a hydro pole and wires damaged in the crash. Highway 86 didn’t re-open until 2:30 Tuesday afternoon.

Road conditions were slick at the time of the crash, as it had been snowing heavily for most of the morning across Midwestern Ontario.

Crashes and rollovers littered an area from Wingham, north to Tobermory as winter arrived in a hurry.

Did vaccines make a difference? Study looks at rates of severe illness from COVID-19

A study of 1.6 million U.S. patients has found that COVID-19 vaccines and boosters lead to low rates of severe illness and death.

The battle to save a part of Juno Beach in France from development is over after the Canadian government announced it would pitch in to buy the land and prevent the construction of a condo on the historic battlefield.

Uvalde's school district on Friday pulled its embattled campus police force off the job following a wave of new outrage over the hiring of a former state trooper who was part of the hesitant law enforcement response during the May shooting at Robb Elementary School.

The Toronto Blue Jays take on the Seattle Mariners Friday in Game 1 of the AL wild-card series at Rogers Centre this weekend. CTVNewsToronto.ca will have live updates throughout the game.

Health Canada approved on Thursday the use of the Pfizer-BioNTech COVID-19 booster vaccine that targets the BA.4 and BA.5 strains of the Omicron variant. It is the second combination vaccine greenlighted by Health Canada's vaccine review team, but the first that targets the virus strains that are now most common in Canada

Nike has suspended its partnership with and paused support for Hockey Canada as the sports organization faces increasing pressure to handle alleged sexual assaults.

Health Canada says some manufacturers of kids' pain and fever medications are now operating "at double or triple their normal volumes" in an effort to address a months-long shortage.

What are BA.2.75 and BQ 1.1? The two emerging COVID-19 subvariants raising concern among infectious disease experts

Two new subvariants of the Omicron strain of COVID-19 identified in recent months could fuel increased cases and hospitalizations in Canada through the fall and winter, infectious disease experts say.