After a successful EML Reverse Santa Claus Parade over the weekend, volunteers were busy Tuesday sorting through all the non-perishable food items.

"We normally on a Santa Claus parade would pull in one truckload, this year we got five truckloads of food," says Pat Connor, food coordinator of STTCC.

"We don't know how much money was raised, but people were donating by the hundreds."

While the St. Thomas Fire Department (STFD) is still counting the money, the Christmas Care 'elves' are working hard at Elgin Centre to sort through the goods by the best-before date. 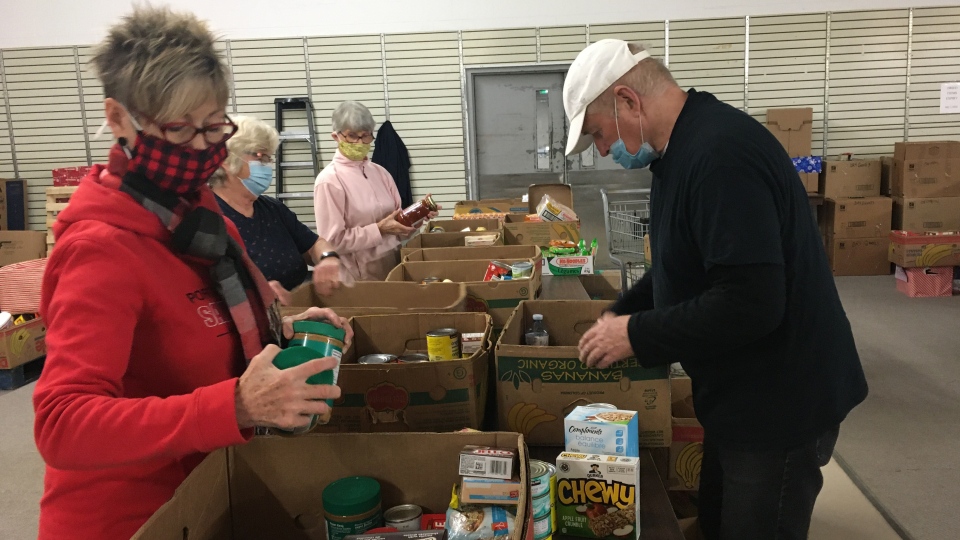 With a few weeks to go, Connor says they'll have more than enough food to serve the community.

"Food banks expect to be hit hard after December, so we are packing for them as well as our clients here," adds Connor. "Anything beyond what we need will be split between caring cupboards and food banks in the area."

The five vehicles full of food were the result of a successful parade put on by MP Karen Vecchio and MPP Jeff Yurek last weekend.

They had 4,650 cars come through Pinafore Park over the three nights.

"Truly a tremendous weekend," says Yurek, MPP for Elgin-Middlesex-London. "It really spoke to the theme 'The Thrill of Hope.' There was over 50 floats from community volunteers and organizations. Everyone was in good spirits and it was amazing the amount of donations that came in food and money."

This upcoming weekend, STFD is partnering with Elgin Chrysler and the St. Thomas Stars Jr. B Hockey Club for a food and toy drive.

The concept is similar to The Gift which is done in Chatham-Kent.

"We are going to load up the antique firetruck, and we have invited Santa to come along," says Kim Destun, fire prevention officer for STFD.

"We'll hit the Dalewood Meadows subdivision Saturday so put your items on the curb or porches for a no-touch pick up. Sunday we plan to do the Orchard Park subdivision.

While always in need of pasta, pasta sauces, canned vegetables and Peanut Butter, the STTCC says they are in good shape as far as donations.

However because of COVID-19 registrations are down.

"We are finding that people are hesitant to come in especially seniors," says Connor.

"They can call us and we will register based on last year's paperwork. We also think CERB has had a big impact on amount of cash in the area, and people normally (requesting) a hamper are not asking this year."

Connor says even if you have a bit of extra cash this year, if you qualified previously, you can come again.

"Forget CERB and that extra cash, we have more than enough food."